BUSINESS China will not discriminate against foreign firms: commerce ministry

China will not discriminate against foreign firms: commerce ministry 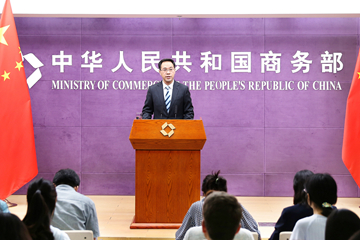 BEIJING, July 11 (Xinhua) -- China will not oppress foreign companies or discriminate against them, and will resolutely protect their legitimate rights and interests, the Ministry of Commerce said Thursday.

Responding to concerns over China's investment environment, Gao Feng, a spokesperson for the ministry, said that he has noticed reports that business confidence in some foreign firms in the country had been affected by the trade friction provoked by the U.S. side, with some worrying about retaliatory measures.

The country has recently introduced a number of measures to support the development of foreign-funded enterprises in China, including adopting the foreign investment law and reducing the negative list for foreign investment, he said.

"All these measures fully demonstrated that the determination of the Chinese government to support the development of foreign enterprises in China will not change," Gao said.

The actually utilized foreign investment in China rose 7.2 percent from a year ago to reach 478.33 billion yuan (70.74 billion U.S. dollars) during the first half of this year, with a total of 20,131 new foreign-funded enterprises established, data from the ministry showed Thursday.

Gao said that the Chinese government would further open up the market, promote investment liberalization and facilitation, strengthen the protection of the rights and interests of foreign investors, and create a more stable, fair, transparent and predictable investment environment to provide better services to foreign firms, and continue to make China the most competitive destination for foreign investment.