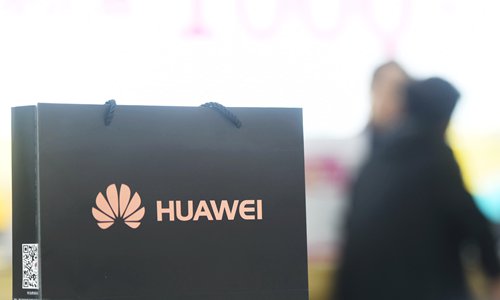 A Huawei logo on a paper bag in a store in Hangzhou, East China's Zhejiang Province, as seen on December 25, 2019. (Photo: VCG)

EU politicians' threats to block China's technology giant Huawei will have a limited influence on most member nations that value technology and trade cooperation with China, but if Huawei is blocked, China would definitely take countermeasures to protect the interests of Chinese companies operating in the EU, experts said on Sunday.

"EU politicians tend to politicize economic problems and seldom consider the situations of specific countries and industries," Xiang Ligang, an expert in the telecoms industry, told the Global Times on Sunday. Their irresponsible statements on blocking Huawei 5G networks will greatly harm the telecommunications industry in Europe, he said.

The comment came after European Commission President Ursula von der Leyen voiced skepticism to German weekly magazine Der Spiegel on Friday over involving Huawei in Europe's 5G networks, amid concerns that its equipment may be used for spying by China.

"If there's a risk that the data of civilians or companies can be tapped into on the basis of this law [national security law], then we can't accept that," von der Leyen said.

"The influence of this statement on EU members is limited, as they need to consider their economic and trade relationships with China in their final decisions," Ma Jihua, a veteran industry analyst, told the Global Times on Sunday.

Most EU countries will continue cooperation with Huawei because if they block the company, their technology and trade cooperation with China will be affected and their domestic economies will be harmed, Ma said.

Huawei is not only a Chinese company, but also a European company, Ma said, noting that a large portion of Huawei's revenue comes from Europe and part of its research, production and sales activities are also carried out in Europe.

The company has signed more than 60 5G contracts worldwide, with Europe becoming the largest 5G market for Huawei outside China, where it has 32 5G contracts.

"Huawei's founder Ren Zhengfei seldom comments on EU's blocking threats, which indicates that Huawei is confident that EU politicians' statements don't have much impact on it," Ma said, adding that Huawei has abundant measures.

Yang Chaobin, president of Huawei's 5G product line, said at a forum in Zurich, Switzerland in October, "Fundamentally, the security concerns of 5G networks represent a technology problem, which can be solved through cooperation between Huawei and its business partners."

Ma said that if a high-tech company that has been operating in the EU for decades is blocked, it means any Chinese company in the EU may be blocked at EU politicians' will and China will definitely come up with countermeasures to protect its companies' interests.

"The Chinese market is a growth point for European brands like Airbus and Volkswagen. What a disaster it would be to the EU if China blocks them with the excuse of security!" Xiang said, noting that the EU's so-called security considerations are just a form of protectionism.