People line up in front of an Hermès store in Shanghai.

The COVID-19 pandemic has had sweeping repercussions on almost all sectors of the worldwide economy. The fashion industry has been among the hardest hit because it is, in essence, under the non-essential spending category. Yet there is light at the end of the tunnel — for some.

Wang Yurong felt lucky when she secured a Louis Vuitton pochette after several days of fighting for it on the luxury brand’s official website.

“It is a birthday gift to myself,” the 28-year-old woman said. “It was hard to get, because thousands of people were competing to get it online. Sometimes you need a little bit luck, as well as a super-quick network speed.”

Wang made her 4,900 yuan (US$767) order on October 25 last year, for the small pochette in monogram canvas, and waited more than two months to get her hands on it. A day after she received the bag, on January 7, its price jumped to 6,150 yuan on China’s official Louis Vuitton website, an increase of about 20 percent.

Luxury brand prices have rocketed this year. Louis Vuitton, Bottega Veneta, Celine, Hermes and a host of others have increased prices on their goods.

The multiple price increase is seen by luxury brands as an effective measure to offset inflation in input labor costs as well as currency moves in the middle of the pandemic.

“It is to adapt to changes in exchange rates,” said a Hermes staff worker. “Some of our products such as necklaces and bags are affected.”

China has been a battleground for big brands, which have suffered big losses in the overseas markets since the outbreak of coronavirus, because it has the virus under control.

The report noted that an international tourism drop has contributed to double and even triple-digit increases in the rate of domestic luxury spending for some brands, but a decrease in Chinese consumers’ total luxury spend.

As the global luxury market declined at a rate of 23 percent in 2020, the Chinese mainland’s share of the market nearly doubled, growing from about 11 percent the previous year to 20 percent last year. The report estimates this growth will continue, putting the country on track to claim the biggest share of the market by 2025 — even after the world luxury market returns to pre-pandemic levels.

“The lockdown has made global travel impossible, so many Chinese people who have the purchasing power have to shop locally,” said Flora Zhang, a marketing director from the fashion and luxury industry.

This statement echoes a Bain & Company report that stated, “With Covid-19-related travel restrictions, China mainland’s portion of Chinese global luxury purchases in 2020 reached a peak of about 70-75 percent.” 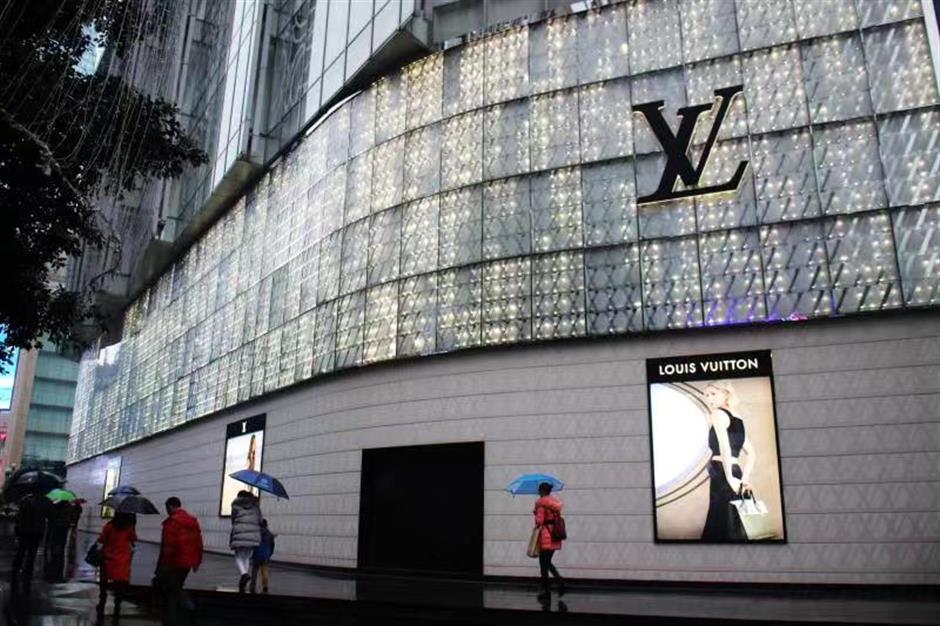 The prices of Louis Vuitton bags have increased between 1-13 percent on its China website.

Since August last year, long queues have been a familiar site outside the doors of luxury stores in major cities across China, with customers having to wait for up to 15 minutes to get in, even on weekdays.

This month, the long lines in front of Canada Goose stores made headlines. Large crowds flocked to the store at IFC Mall in Pudong New Area and the iapm mall in downtown Shanghai, waiting more for more than two hours to grab a jacket priced over 10,000 yuan.

“Nine out of 10 customers who got in would buy,” an iapm store worker said. “One big reason is the imports are strictly controlled due to the pandemic.”

Luxury brands always know how to grasp the consumers’ mental demands accurately. It might be human nature to buy when the prices are going up instead of going down.

“Get it as early as possible, if you really like it,” said Wang, who was pleased she bought the Luis Vuitton pochette before the price increase. “The brand had gone up in price twice in March and May in 2020. I can’t sit and wait. If I don’t buy it now, it’ll become more expensive in future.”

Yet some people are concerned about the consumerism trap.

“It’s a game of play-hard-to-get,” said Qi Yue from the business review media CHReview. “The price increase protects the bottom line of luxury brands, keeps their value with some appreciation for the customers who buy first, and even stimulates the purchase desire of potential customers. It kills two birds with one stone.”