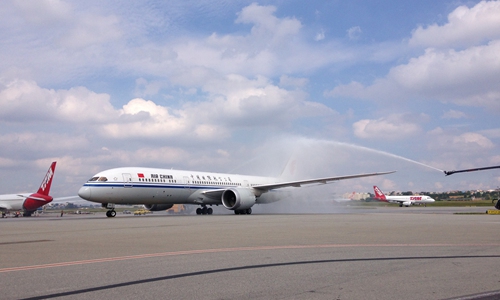 Three Chinese state-owned airlines have released their 2019 fiscal income data, showing robust development in terms of revenues, but the epidemic has cast a shadow over their future prosperity.

In terms of passenger transportation, the three airline giants' load factors in 2019 remained above 80 percent.

China Eastern said the 2019 passenger turnover growth rate in China's civil aviation industry was 7.9 percent, higher than the global growth rate of 4.2 percent. But there are still uncertainties ahead. The three carriers say that if international oil prices - their largest operating costs - fluctuate significantly, that will affect their operating performances.

Air China says that if the average jet fuel price increases or decreases by 5 percent, the cost of the group's jet fuel will increase or decrease by about 1.798 billion yuan.

The industry's good performance may be impacted by the pandemic, however, as all three carriers have warned that the coronavirus outbreak has challenged the global aviation industry and has led to uncertainties about their future incomes.

China Southern says international passenger demand may be cut further as the regulator has restricted international flights, and it is expected that the pandemic will affect the company's operations. The severity of the potential impact remains unknown.

Air China expects the pandemic will have an adverse impact on its business in the short term, and China Eastern said the virus may trigger new changes in the global air transport industry.

Their predictions have been echoed by the latest data from the air regulator, which said the aviation market has shrunk sharply due to the COVID-19 pandemic.

Chinese airlines saw a massive business slump in February due to the coronavirus assault, with the industry recording losses of 24.5 billion yuan in the month, including record losses of 20.96 billion yuan for carriers, the Civil Aviation Administration of China (CAAC) said last month.

Air China's previous data showed that in the first two months of the year, Air China had carried 10.78 million passengers, a decrease of 43.1 percent year-on-year. The load factor in February was 51.4 percent on average, a decrease of 32.6 percentage points from one year earlier.

The International Air Transport Association (IATA) said on Tuesday that global airlines may burn through $61 billion of their cash reserves during the second quarter ending June 30, while posting quarterly net losses of $39 billion.

It also said full-year demand will fall by 38 percent and full-year passenger revenues will drop by $252 billion compared to 2019. The fall in demand would be the deepest in the second quarter, a 71 percent drop.

Alexandre de Juniac, IATA's director general and CEO, even warned that airlines cannot cut costs fast enough to stay ahead of the impact of the crisis. However, Chinese airlines have seen an upward trend.

Qi Qi, an independent market analyst, told the Global Times that the improvement of the domestic situation has provided opportunities for airline recoveries, but the cut to international routes will put carriers' second-quarter performances under pressure.

China has recently announced a strict measure, allowing only one weekly flight on one route to any specific country in a bid to prevent rising numbers of imported virus cases. It also introduced a number of other measures including reductions in landing, parking and air navigation charges, as well as subsidies for airlines that continue to operate flights to the country.