The State Intellectual Property Office (SIPO) on Monday published a notice on the rejection of 17 trademark registration applications using the term "pure love," which was a phrase written by a Chinese martyr before his death.

"Pure love, only for the country" is a declaration and last words written by border hero Chen Xiangrong, one of the four heroes who sacrificed their lives in the Galwan Valley conflict with Indian military in June last year. 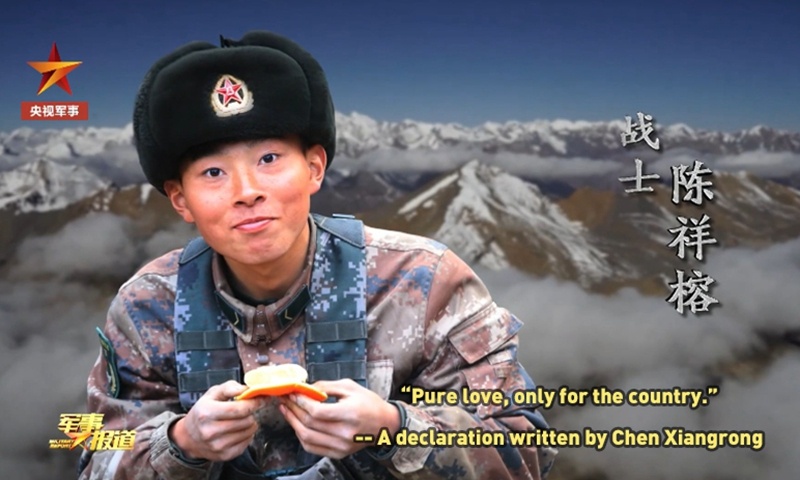 "The phrase fully demonstrated the martyr's love for the motherland and the noble sentiment of selfless dedication," read the notice of SIPO on its official website.

Chen was born in 2000 and lost his life in defense for the country at the age of 19. He has been awarded first-class merit in February when Chinese media the PLA Times unveiled details and casualties of Chinese soldiers in the Galwan Valley skirmish for the first time, months after it occurred.

Since February 20, "pure love" has been used as a trademark by some enterprises and natural persons to submit registration applications to the Trademark Office of SIPO, seeking improper interests and providing illegal services on behalf of agencies, desecrating the spirit of the martyr and deviates from the core socialist values, which is extremely likely to have a negative social impact, according to SIPO.

In response to this, SIPO condemned, and decisively rejected 17 trademark registration applications with the term "pure love" according to the provisions of the Trademark Law, saying "harmful to socialist morality or having other adverse effects."

The rejection was just another move that underlines China's efforts to protect the reputation of heroes and martyrs and crack down on the humiliation and insults against them, even on the internet, an analyst on trademark surnamed Li based in Shanghai told the Global Times on Tuesday.

As of March 1, seven netizens have been detained by police for defaming the martyrs who died in the clashes in the Galwan Valley.

China's top judicial body announced in late February that it had added 22 provisions to the Criminal Law in a supplementary regulation that took effect on March 1, including provisions for slandering martyrs, attacking police and disrupting public transportation.

Li noted that the rejection revealed a stricter and more standardized trademark review in China.

Actually, the Trademark Office has rejected many "improper" applications recently, for example, those with characters "Ding Zhen" coming from the name of one of China's biggest social media influencers of 2020.