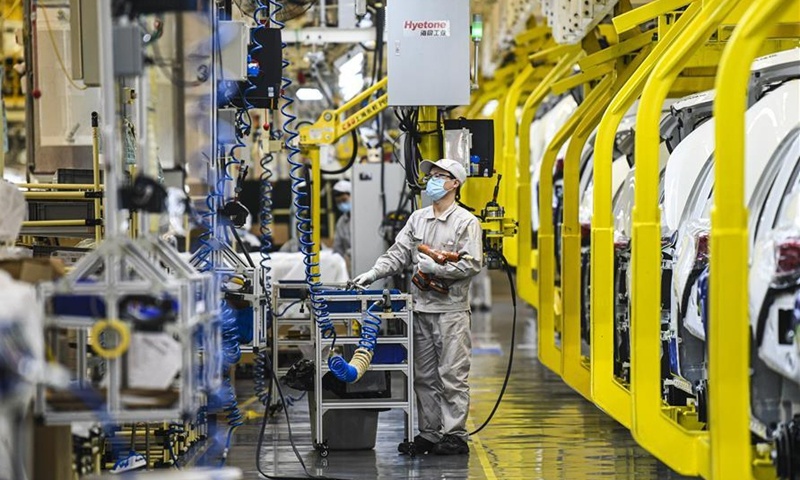 Workers are busy at the Xinjiang car plant of GAC Motor in Urumqi, northwest China's Xinjiang Uygur Autonomous Region, Sept. 24, 2020. Urumqi has made efforts to propel the transformation and upgrading of its equipment manufacturing sector. A modern industrial system with a focus on intelligent, green and customized manufacturing is gradually taking shape in the city. At present, Xinjiang is home to more than 40 enterprises of scale in developing intelligent manufacturing. (Photo: Xinhua/Wang Fei)

As global automakers - including those in China - grapple with a chip supply shortage that began in the fourth quarter of last year, Chinese auto experts are urging the industry to turn the crisis into an opportunity and set up a larger domestic chip production base.

State-owned automaker GAC Group told the Global Times on Thursday that it is actively exploring and developing alternatives for auto chips. Original equipment manufacturers that supply it must adopt measures such as supply monitoring, information sharing and department linkages, so they can identify and respond to risks promptly.

GAC Capital invested in Chinese vehicle chip start-up Horizon Robotics in September 2020. GAC Capital and the GAC R&D Center forged a strategic partnership with Horizon, and they have jointly unveiled the Journey 3 artificial intelligence (AI) chip for the automaker.

GAC said the impact of the chip shortage will be temporary, and disruptions to output will be controllable. The company will maintain its goal of 10-percent year-on-year sales growth in 2021.

Since the start of March, global vehicle makers from Ford to Volkswagen have suspended production at some plants due to chip shortfall. The shortages mainly reflect the sector's faster-than-expected rebound from the pandemic, especially in China, which is the world's largest auto market.

Chinese carmakers haven't been able to avoid the chip crisis because they import 90-95 percent of their chips, data showed.

William Li Bin, CEO of Chinese electric vehicle (EV) maker Nio, said in a group interview on Wednesday that most of the automotive chips that are in short supply are basic versions that cost only $1. The chip shortfall will be an increasing challenge in the second quarter before easing in the third quarter, Li said.

Chinese auto experts are urging the domestic auto and chip industries to accelerate localization amid the chip shortfall, which is both a crisis and an opportunity.

As the largest EV market in the world, China will see surging demand for auto chips as vehicles become more intelligent and autonomous driving technology matures. That means the nation has to build up its chip capacity, Mei Songlin, a Shanghai-based auto analyst, told the Global Times on Thursday.

Mei said that the current global vehicle chip shortage is huge and it is hard to predict when it will end.

Li Shaohua, deputy secretary general of the China Association of Automobile Manufacturers, said the recovery will take at least nine months to one year, longer than the previous estimate of six months.

Li noted that the development of domestic auto chips should not only solve technological problems but also ease concerns on the market end.

Chinese new-energy vehicle (NEV) maker Xpeng is reportedly developing chips in China and the US, mainly for auto vehicles. The company declined to comment on the issue when contacted by the Global Times on Thursday.

"It's not surprising if Xpeng is making such a move, as core competitiveness in the smart mobility race lies in advanced technologies that rely on high-performance auto chips," Mei said.

According to Wang Chuanfu, chairman of domestic EV maker BYD, the company is not affected by the global chip shortage, and it hasn't had to suspend production, thanks to its own advanced chip-related R&D.

BYD Semiconductor, the company's chip division, is China's largest automotive insulated gate bipolar transistor (IGBT) maker. It competes against foreign chip giants such as German's Infineon Technologies and Japan's Mitsubishi Electric, which have for long been dominant in the global IGBT market.