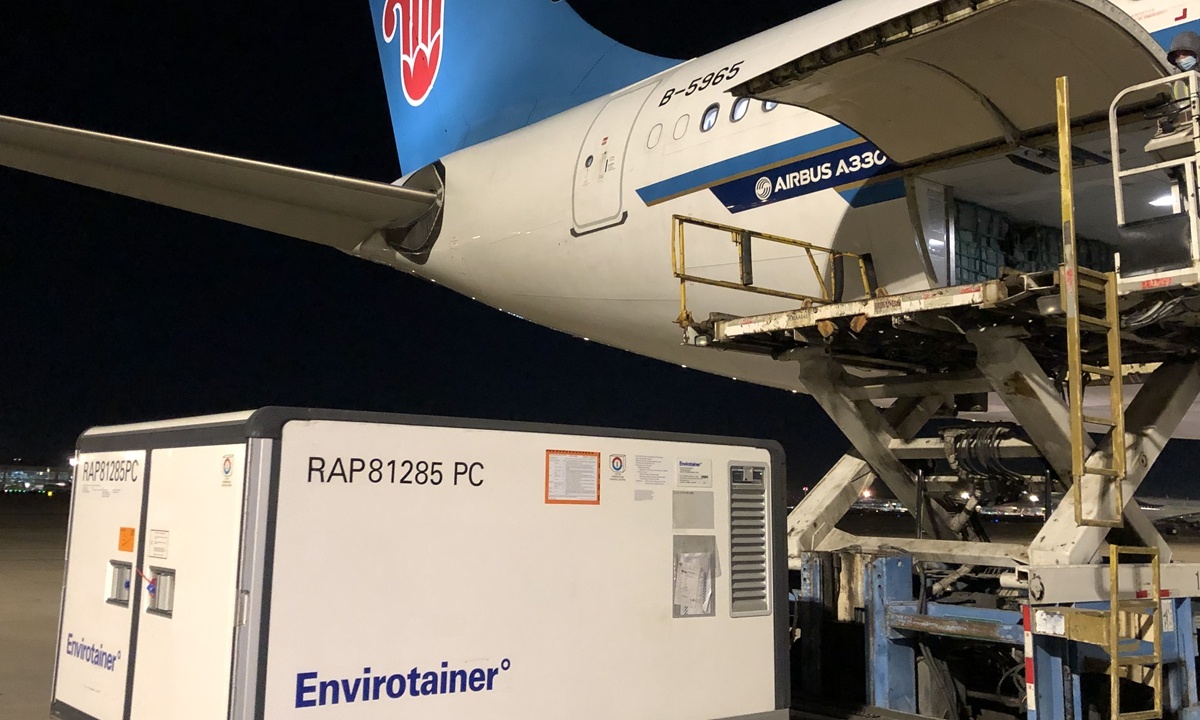 Nearly a year after the outbreak of the COVID-19 epidemic began, more news about coming vaccines is emerging. Global demand for vaccine transportation will present a challenge to the existing global civil aviation capacity.

Although domestically produced vaccines have yet to begin the process of mass distribution, Chinese aviation and logistics firms including airports are making preparations for a gradual scale-up, hoping to match up to what will be the largest and most complex global logistics operation ever undertaken.

"We are in good preparation for vaccine transport," Huang Xiaoyan, deputy director of sales department with China Southern Air Logistics told the Global Times on Thursday, adding that they are working with domestic vaccine producers.

She attributed it to its extending network covering Europe, Southeast Asia, Central Asia, Japan, South Korea, North America, Middle East and as far as to Africa, and the giant fleet size, as China Southern has 850 aircraft including 14 Boeing 777 cargo aircraft in which each cargo plane could carry 100 tons of cargo.

Addressing cold-chain logistics, Huang said the company had experience transporting vaccines dating back to 2015, highly relevant in this case most of domestically produced vaccines for COVID-19 are required to be administered at temperatures of between 2-8 C.

On November 30, the first vaccine charter flight carried by China Southern Air Logistics took off from Beijing airport heading for Istanbul, it is the first time for the carrier to work with Sinovac Biotech for overseas vaccine transport, and the largest batch of overseas transport for the carrier with active temperature-controlled container leasing service provider Envirotainer for the service, which has since established a Beijing service site as of September 1 last year.

One day earlier, a cargo flight from Swissair collected a shipment of vaccine from Beijing Capital International Airport to deliver them to Brazil before Christmas.

Pharmaceutical cargo has stringent requirements for transportation scheduling and storage safety, and has become the preferred logistics method for pharmaceutical manufacturers due to its speed and efficiency.

The International Air Transport Association (IATA) created the Center of Excellence for Independent Validators in Pharmaceutical Logistics (CEIV Pharma), to help organizations and the entire air cargo supply chain to get on the right track to achieve pharmaceutical handling excellence.

To meet the demand, the Shenzhen Bao'an International Airport told the Global Times Wednesday that in November it acquired the CEIV Pharma program certification issued by the IATA.

The Shenzhen airport said it has standardized the cold-chain drug management process, in addition to building a 350-square-meter refrigerated warehouse for vaccine storage, which is equipped with cold-storage transfer vehicles.

With this certificate, Shenzhen becomes only the third mainland airport credited after Beijing and Shanghai, meaning that vaccines will be shipped and distributed through the region in the future.

Huang from China Southern Air Logistics said the company was also certified by the IATA for CEIV Pharma in February, making their vaccine transport more reliable, adding that the company can not only provide traditional airport-to-airport services, but also provide end-to-end full-process logistics services for vaccine manufacturers throughout the entire logistics service ecosystem.

SF Express is also building up the cold-chain transportation capacity. SF Express told the Global Times in November that it has successfully helped Sinovac transport vaccines from Beijing to Sao Paulo, Brazil in July.

Media reported that other carriers including Juneyao Airlines are also preparing for the use of passenger aircraft storage compartments to transport vaccines, including storage refrigerators and dry ice.

China currently has five COVID-19 vaccines in Phase III of clinical trials and announced at the end of last year that it has granted market approval attached with conditions for its first domestically produced COVID-19 vaccine, which was developed by Sinopharm, marking a monumental step in the battle against the pandemic that has to date killed 1.79 million globally.

A white paper jointly released by DHL and McKinsey in September said there are currently over 250 vaccines across seven platforms being developed and trialed. As COVID-19 vaccines have leapfrogged development phases, stringent temperature requirements as low as to -80 C are expected to be imposed for certain vaccines to make sure their efficacy is maintained during transportation and warehousing. This will mean new logistics challenges to the existing medical supply chain that conventionally distributes vaccines at 2 C to 8 C.

The IATA in November released a guidance to ensure that the air cargo industry is ready to support the large-scale handling, transport and distribution of a COVID-19 vaccine, saying that delivering billions of doses of a vaccine that must be transported and stored in a deep-frozen state to the entire world efficiently will involve hugely complex logistical challenges across global supply chains.

Globally, airlines, airports and fleets are also actively preparing fora rush of vaccine deliveries. Emirates SkyCargo said on December 25 that it has notched yet another milestone by flying COVID-19 vaccines manufactured by Pfizer-BioNTech to the UAE for the first time for the Dubai Health Authority.

More recently, Emirates SkyCargo has set up the world's largest dedicated airside storage and distribution hub for COVID-19 vaccines in Dubai with the capacity to store up to an estimated 10 million doses of vaccine at the 2-8 C temperature range at any one point of time.

FedEx told the Global Times on Wednesday that its network is well-positioned to handle COVID-19 vaccine shipments around the world with temperature-control solutions, near real-time monitoring capabilities and a dedicated healthcare team to support the express transportation of vaccines and bioscience shipments.

DHL also said it has started the international distribution of COVID-19 vaccine. Israel received the first batch of the vaccine with flights operated by DHL Express and DHL Global Forwarding in December, and the company said there will be more deliveries over in the coming months.