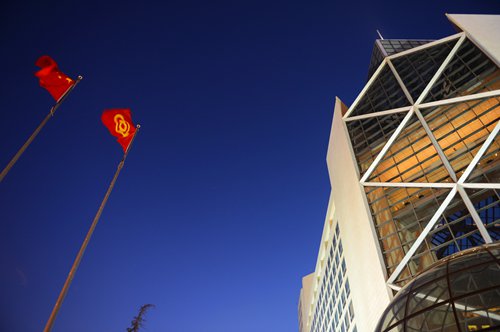 The Chinese national flag and a banner of Industrial and Commercial Bank of China (ICBC) logo are seen waving in front of ICBC's headquarters in Beijing. (Photo: VCG)

Five Chinese bank brands made it to the top 10. ICBC was listed as the world's most valuable bank brand at $79.8 billion. It was also awarded an elite AAA+ in its brand strength rating, one of the only three in the world. China Construction Bank was in second place at $69.7 billion.Agricultural Bank of China was valued at $55 billion, taking third place, Bank of China was fourth at $51 billion, and China Merchants Bank was 10th at $22.4 billion.Chinese banks' brand values grew by 28 percent in 2018 to reach a total of $407 billion. Dong Dengxin, director of the Financial Securities Institute at Wuhan University of Science and Technology, said the boom in China's big banking brands was largely due to China's economic growth.He also noted significant money supply and the higher saving rate in China. "For the past 40 years, the banking industry has been flourishing ... in the domestic market," Dong said. "Now, the big banks are also looking for more opportunities in the international markets. They are using their domestic strength as a foundation," Dong said.Despite the growth in brand value, Dong warned about the challenges posed by technology companies that have begun to offer services like online payments and financing. "Technology giants such as Alibaba and Tencent have been encroaching into the financial services sector," Dong said. "Traditional banks will have to face new challenges to meet customer expectations ...if they want to stay in the game."