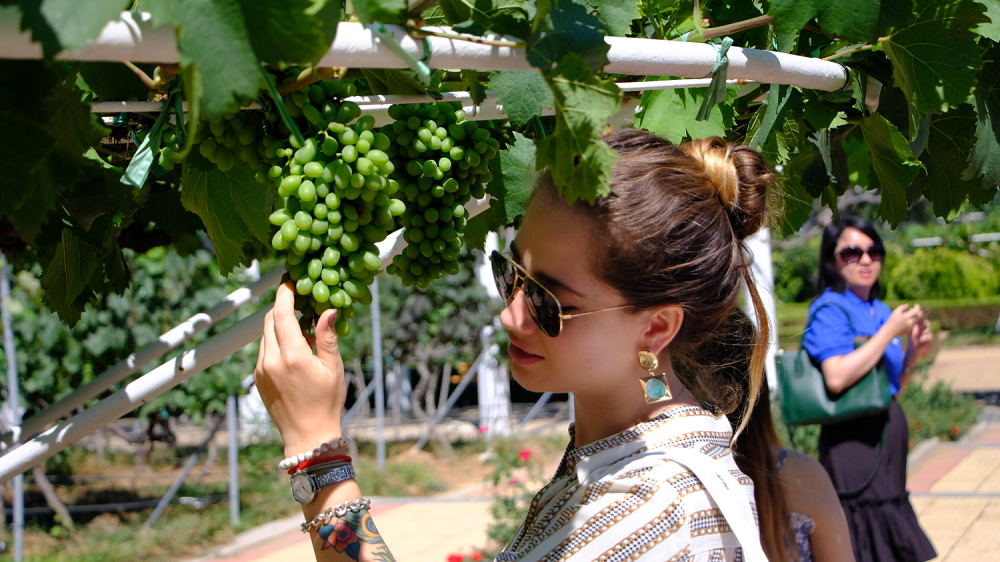 A foreigner gets a closer look at the grapes at the Changyu Castel Winery in Yantai, East China's Shandong province. (Photo provided to chinadaily.com.cn)

With around 10 kilograms of Ugni Blanc grape being fermented into wine and then distilled twice to age in oak barrels for at least six years, a bottle of 700 ml Koya brandy is created, giving Chinese consumers more choices for high-end brandy.

The Koya brandies being put into the market have three series: Koya VSOP which mature in oak barrels for six years, the 10-year Koya XO, and the 15-year Koya XO.

As early as in 1915, a brandy product of Changyu won a gold medal at the Panama-Pacific International Expo in San Francisco.

Last year, the company produced over 40,000 metric tons of brandy, generating 1 billion yuan ($145 million) worth of sales for Changyu, the company said.

"Along with our domestic wine and imported wine, brandy products will be a major driver of our company's sales in the near future," said Zhou Hongjiang, chairman of Changyu.

Designed and built in the medieval Romanesque style of Europe, the main buildings of Chateau Koya cover an area of two hectares. The chateau has over 60 hectares planted with Ugni Blanc grape. It is expected to produce 300 tons of Koya products annually.

China's brandy production though is in its early days. Dozens of domestic wine companies produce brandy and only a few of them are in scale. Around 139,300 tons of brandy were produced in China last year, CADA said.

Retail prices of Koya products on China's leading retail portal Taobao stand at a similar level with high-end foreign brandy products. On Taobao, a 700-ml bottle of Hennessy VSOP is priced from 488 yuan to 599 yuan while the same volume of a six-year Koya VSOP is 468 yuan.

"Chinese brandy producers can embrace precious opportunities to develop the domestic market if they can carry on Chinese wine-making culture, (and) use world class winemaking skills to ensure the brandy quality," said Wang Qi.

"Chinese brandy producers like Changyu have been making achievements on innovating efficient ways to create quality products. To promote the overall brandy industry in the domestic market, Chinese producers need to communicate and learn from their foreign counterparts," said Xu Yan, deputy head of Jiangnan University.