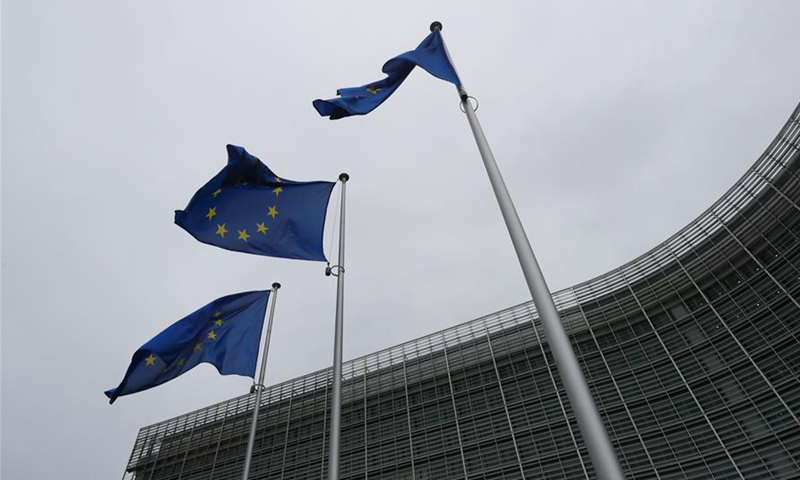 Flags of the EU fly in front of the headquarters of the European Commission in Brussels, Belgium, June 30, 2020. (File photo: Xinhua)

BRUSSELS, Sept. 24 (Xinhua) -- The China Chamber of Commerce to the European Union (CCCEU) expressed concern once again on Thursday that the EU document on foreign subsidies could pose legal barriers to Chinese companies operating in the bloc.

On June 17, the European Commission issued the "White Paper on Leveling the Playing Field as regards Foreign Subsidies" and has since launched a public consultation.

In a statement, the CCCEU called on the Commission to carefully examine the legality, rationality, and necessity of adopting new legislative tools on foreign subsidies, and urged that the white paper not be turned into legislation.

"The legal framework proposed in the white paper to scrutinize foreign subsidies will directly take a toll on non-EU undertakings, including our members, and the EU legislative and business environment they operate in," CCCEU Chairwoman Zhou Lihong said in the statement.

In its response to the public consultation, the CCCEU stressed that it would be "unnecessary" for the EU to formulate a new set of legal instruments.

The new legal tools proposed in the white paper lack a clear legal basis under EU treaties, will overlap with a number of existing EU and member states' instruments, and produce "double standards" in their enforcement, the CCCEU noted.

It added that the proposed legal tools could also potentially be incompatible with the EU's WTO obligations including principles such as national treatment, most favored nation status, and non-discrimination.

The chamber believes the white paper fails to clarify key concepts such as definition and forms of "foreign subsidies," "leveraging effect" and "material influence," which will create great legal uncertainties and grant the EU more discretionary power.

The EU should take into consideration businesses' solidarity efforts in crises as some Chinese companies were invited to invest in Europe after the European debt crisis -- the favorable terms they enjoyed at the time should be legitimately protected and exempted from future scrutiny, the chamber said.

The CCCEU set up a task force comprising lawyers, business representatives and EU-affairs experts to prepare its response to the public consultation.

On Sept. 10, the CCCEU and global strategy consulting firm Roland Berger jointly published the 2020 Recommendation Report, urging Brussels to address Chinese businesses' pressing concerns amid declining sentiment on the ease of doing business in the bloc.

Based in Brussels, the CCCEU was founded in 2018 by a group of Chinese enterprises. It has 70 members and chambers in member states, representing about 1,000 Chinese companies in the EU.