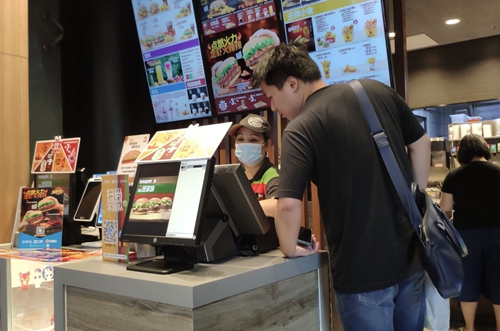 A consumer orders food at a branch of Burger King in Shanghai on Friday. (Photo: Global Times)

The incident has caused "some impact" on the business, one employee from a Burger King branch in Hangzhou, Zhejiang Province, who preferred to be anonymous, told the Global Times on Friday. The restaurant's customer flow has declined slightly this morning compared to normal working days, the employee said.

Several Burger King restaurants reached by the Global Times said their businesses are running as normal. One customer, surnamed Liu, from Hefei, capital of East China's Anhui Province, told the Global Times on Friday that he found that Burger King's bread had been freshly baked this morning since the incident. "I will still choose Burger King," Liu noted, adding that it's only good if the incident helps the company improve its overall management and food quality.

A reporter from the Global Times also went to several Burger King restaurants located in Shanghai, noticing some consumers expressing their disappointment on this issue and hoping that market regulators would strengthen their food quality inspections.

Earlier this morning, market regulators in Beijing began inspections in several of Burger King's restaurants, including checking whether they obey the expiration dates on food and inspecting the food freezing records, according to the Beijing Daily on Friday. Strict punishments will be given to those who violate the quality regulations, and online operations will also be suspended, said the report.

Besides Beijing, other cities including Shanghai, Hangzhou and Hefei have also launched similar campaigns.