Clothing is one of the most basic items along with food and shelter. However, the data shows that the sales of clothing have declined significantly in recent years, and retail sales of clothing in key national retailers have also experienced a downward trend. Do Chinese people no longer love buying clothes?

The number of clothes bought shrinks

The sales of clothing continued to decline, and the proportion of clothing spending in overall consumption expenditure decreased.

In recent years, customers are presented with diverse choices in clothes, including rent apps, mini programs, second-hand offline stores, online trading platforms and franchisees. Buying new clothes is no longer the only choice.

Such new trends and data reflect the changes taking place in the apparel industry.

It is true that less clothes have been bought. The China Business Federation and the China National Business Information Center have released data of commodity sales in the Chinese market. They show that the retail sales of key national retailers decreased by 4.2% in 2018, whose growth rate was 8.4 percentage points lower compared to 2017. The sales of all main categories of clothing except sportswear were smaller than those in the same period the previous year.

In the overall consumption expenditure, the proportion of clothing spending has dropped. According to the National Bureau of Statistics, in 2018, the per capita clothing consumption of national residents was 1,289 yuan, a year-on-year increase of 4.1%. Its growth rate was 1.2 percentage points higher than that of the same period the previous year. At the same time, the per capita consumption expenditure of residents increased by 6.2%. The growth rates of daily necessities and services, transportation and communication, education, culture, entertainment, and medical care were significantly higher than that of clothing consumption. In 2018, the proportion of money spent on clothes per capita in the overall average consumption expenditure was 6.5%, a decrease of 0.3 percentage points from the previous year. 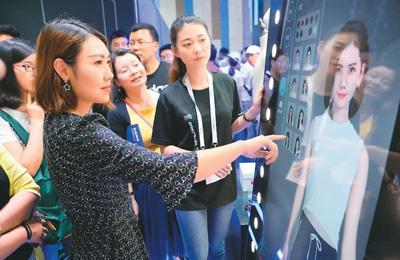 The unit price of clothes has risen sharply, contributing to growth in overall clothing expenditure.

It begs the question: why would the sales of clothing decline with the overall clothing consumption still growing?

The apparel industry is still growing if it is judged by its retail sales. The data shows that the retail sales of clothing products in companies above a designated size reached 987.04 billion yuan, an increase of 8.5%, with its growth rate 0.5 percentage points higher than that of 2017. The figure has remained on an upward trend since 2017. In 2018, the retail sales of apparel products from key national retailers increased by 0.99% year-on-year.

The overall clothing sales have declined while retail sales and consumption of clothing have increased, which means that clothing prices have changed.

According to the China National Commercial Information Center, clothing prices rose by 1.4 percent in 2018. And in terms of the key large retail enterprises in China, rising prices are the main reason for the decline in garment sales. In 2018, the unit price of clothing at major retail enterprises in China increased by 5.3 percent, 4.1 percentage points higher than in 2017.

Why are prices rising?

For one thing, the comprehensive cost of enterprises remains high. China National Garment Association (CNGA) pointed out that due to the continuous growth in labor costs, financing, taxation, raw materials and energy, the operating costs of enterprises has been rising.

Industry insiders indicated that the popularity of consumption concepts including fashion, Fast Moving Consumer Goods (FMCG) and personality, has changed the clothing consumption market. And the production mode has changed from “big and inclusive” to “small and fine”. Apparel enterprises invest a lot of manpower and financial resources in apparel design, style and fabrics. It is difficult to reduce the cost of innovation and expand revenue, and the selling price of a single garment also increases. 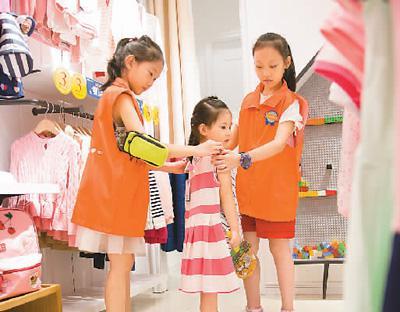 On August 16, at the Beibei Shopping Mall in southwest China’s Chongqing, students at local elementary schools participated in the event, “Little Matching Teacher” and tried clothes out.

In line with the trend of differentiation and style, not only high-end luxury brands, but more  popular brands have begun to introduce by-line products, and the clothing market seems to be more “lively”.

CNGA indicated that, as new consumer groups emerge, enterprises cannot label the “post-90s” or “post-2000s” consumer groups as they used to capture the preferences of the consumer groups in the 1960s, 1970s and 1980s. More niche and pretty brands are favored. Younger and higher-end brands have gradually become the mainstream of the garment industry’s transformation and upgrading.

In terms of the crowd, men’s, women’s and children’s clothes are showing different competitive patterns.

Women’s wear is branding. The China National Commercial Information Center showed that  high-end women’s wear brands have advantages in design, promotion and marketing, making it easier to stand out in the market.

On categories, sportswear is of great potential. The data shows that in recent years, the annual growth rate of the domestic sportswear market has remained at about 30 percent, and the demand for fashion and high cost performance of products will continue to increase.