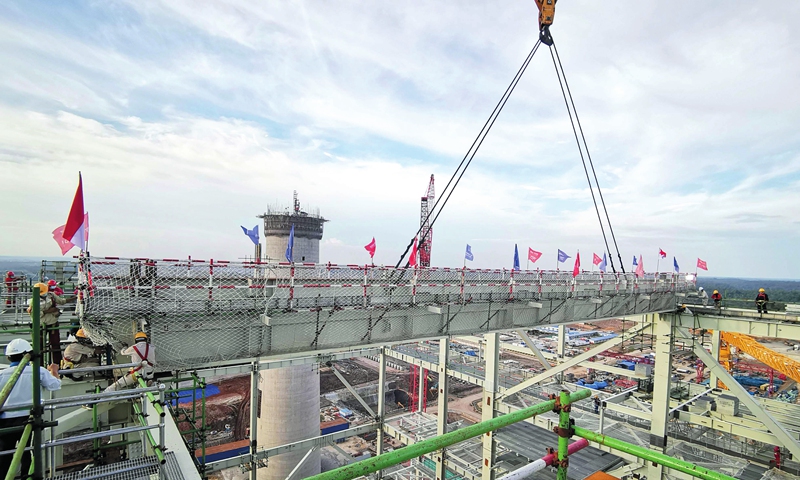 The Bukit Asam Coal Power Plant of Indonesia is under construction on Sunday. The China-Indonesia joint project is a part of the two countries' cooperation on the Belt and Road Initiative. (Photos: cnsphoto)

As the world is struck by the COVID-19 pandemic, many industries have been suspended around the world, leaving many jobless.

The deadly virus has hampered the BRI to an extent, but the initiative has been overcoming difficulties, bringing benefits to participating countries.

China Tiesiju Civil Engineering Group (CTCE), one of the major contractors of BRI projects, told the Global Times in a statement on Tuesday that some new projects are facing difficulties coming into operation, and those under construction might witness rising costs and delays due to restricted movement of goods, personnel and capital during the pandemic.

Many economists see the recession triggered by the pandemic as the worst economic crisis since the Great Depression in 1929-33. The BRI, a development strategy involving at least 137 countries and 30 international organizations, can hardly escape adverse effects.

However, China as a whole, as well as numerous Chinese companies, have been working hard to pull through the crisis in a variety of ways, and have already achieved considerable outcomes.

According to China's Ministry of Commerce, Chinese enterprises invested $2.72 billion in 48 economies related to the BRI in January and February, increasing by 18.3 percent from the same period in 2019.

Meanwhile, companies have been firmly pressing ahead with the implementation of overseas projects.

All the 19 overseas projects have resumed production, according to a statement sent by the China Railway 14th Bureau Group Co., Ltd. (CRCC14) on Wednesday. One of them, the project for Malawi Community Technical Colleges, has been operating without hold-ups despite the outbreak. Other projects, such as building roads in Niger and tunnels in Ecuador, have started proceeding in orderly fashion, contributing to BRI partners' economic and social progress amid the recession.

CRCC14 has taken multiple steps to assure virus prevention. In Angola, the company has dispatched doctors to take employees' temperatures on a daily basis, purchased medical supplies, and conducted medical lectures; many interpreters have also been working to exchange real-time information on African outbreaks with local employees in Portuguese to help ease their panic.

China Communications Construction Co  Ltd (CCCC), which has business in 157 countries and regions around the globe, has suffered severe impact brought about by the pandemic. To cope with the risks, the company has built emergency response mechanisms, and paid extra attention to its employees' welfare.

In Brazil, some expressed masks should only be used by patients with infectious diseases, while the healthy don't need to. CCCC responded by updating real-time epidemic information on a regular basis, holding lectures, and printing out educational flyers, benefiting not only its employees, but the community.

First Highway Engineering Company (FHEC), another subsidiary of CCCC, launched a mailbox to listen to employees' demands and ease their anxiety. The company has prepared sufficient supplies in advance and has built a network connecting its offices in many countries.

So far, 923 overseas projects out of the company's total of 986 are working in progress, Song Hailiang, president of CCCC, said on April 18 during an interview with China Central Television.

Countries along the route have also been aware of China's efforts and expressed confidence in the BRI.

China-Africa expert Cliff Mboya, who is based in Nairobi, Kenya noted that the BRI "will not be hurt to the extent that investments and long-term projects stop because it will play an important role in the economic recovery of BRI countries."

Md Enamul Hassan, a senior journalist and columnist of Bangladesh, told the Global Times the majority of Chinese personnel from most of the major projects of China-Bangladesh cooperation, including the Padma Bridge, the Padma Bridge Railway Link Project, and the Multi-lane Road Tunnel Project under River Karnaphuli, are still working to ensure steady construction progress with adequate epidemic control and prevention measures.

"I believe the Western media is running malicious propaganda against the BRI as they are suffering from pending replacement anxiety about China," he said. "But the reality is that the BRI projects are going on in full swing in different countries."