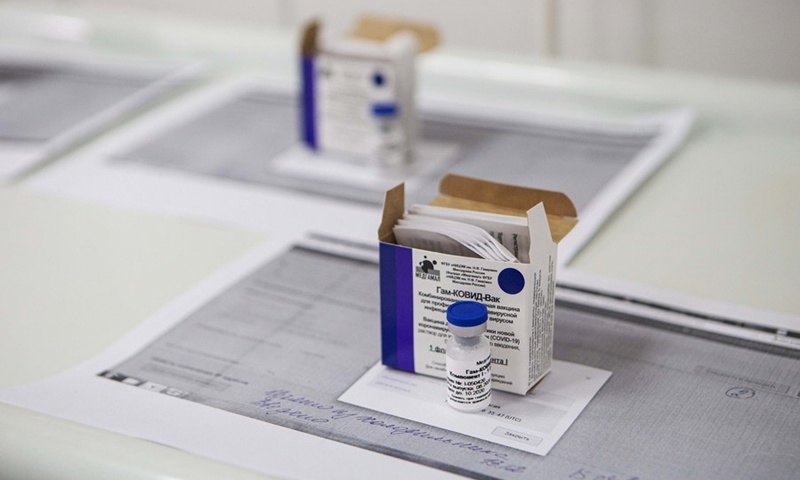 If these companies successfully deliver the foreign-developed vaccines on a massive scale, the "made in China, for the world" model could gain momentum and make the country a production base of global vaccines to fight the coronavirus, experts said.

On March 29, RDIF and Shenzhen Yuanxing Gene-tech Co, a biotechnology company, agreed to cooperate to produce more than 60 million doses of the Sputnik-V vaccine.

This was followed by an April 1 deal between the RDIF and TopRidge Pharma, a subsidiary of Tibet Rhodiola Pharmaceutical Holding, to manufacture more than 100 million doses, and an April 19 deal involving Hualan Biological Bacterin Inc to produce 100 million doses.

In a stock exchange filing dated Tuesday, Hualan said Human Vaccine (HV), a Russian company, will transfer relevant technology to the company so it can conduct related research and development to mass produce the vaccine. The R&D results would be examined by HV and once approved, the company will begin to take orders from the Russian side.

There is uncertainty in such an endeavor, the company said in its filing.

The combined amount of vaccines involved in these deals will be sufficient to vaccinate 130 million people, given Sputnik-V's dual-shot procedure.

"These deals will be the first for a Chinese pharmaceutical company to produce foreign-developed vaccines under an OEM arrangement, making China a production base for global vaccines," Tao Lina, a Shanghai-based medical expert on vaccines, told the Global Times on Wednesday.

But Tao warned that difficulties lie ahead and production management will be the key to success.

As the virus is still sweeping across the world, the Russian vaccine is in high demand and has been approved for use in more than 60 countries with a total population of 3 billion people, according to the RDIF.

The Russian sovereign fund also declared that the vaccine is the most efficient COVID-19 vaccine in the world, having an efficacy of 97.6 percent as shown by data analysis from 3.8 million people vaccinated in Russia.

As of Wednesday, there were 142 million global cases, data from Johns Hopkins University showed.

The RDIF has sought to cooperate with many pharmaceutical firms around the world, including those in India, Argentina and Serbia.

Chinese firms such as Hualan Bio, a company that makes flu vaccines, is capable of vaccine production and also has the capacity to expand production to meet the demand for the coronavirus vaccine, which is why the Russian company approached it to produce the Sputnik-V vaccine, Shao Yiming, a chief medical advisor for the R&D of Chinese vaccines, told the Global Times on Wednesday.

The contract manufacturing arrangement reflects the growth of strategic mutual trust between China and Russia, which is based on a profound foundation of cooperation, experts said.

"For example, the China Center for Disease Control and Prevention signed a strategic cooperation agreement with Russia's Gamaleya Research Center years ago. The two sides hold meetings on strategic cooperation each year," said Shao, adding that on Monday, a Russian conference on infectious disease control invited experts, including some from China, to be present at the event.

Shao said that Chinese enterprises also have the strength to help US and European developers to mass produce COVID-19 vaccines if the conditions are met.