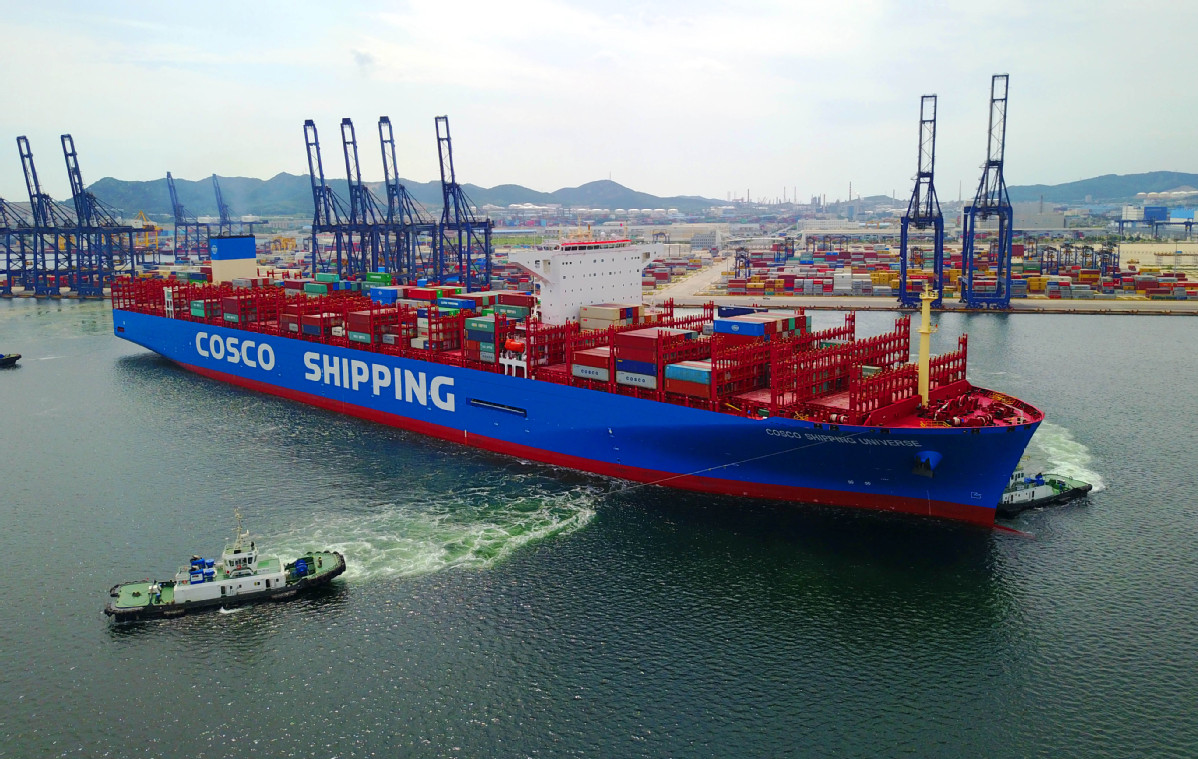 COSCO Shipping Universe, one of the biggest container ships in the world, docks at Dayao Bay of Dalian Port, Liaoning province, in August. (Photo: China Daily)

With an initial payment of $56 million, this deal was sealed in Davos, Switzerland, on Wednesday, the Chinese company said in a statement on Thursday.

Volcan is a Peruvian polymetallic miner engaged in the exploration and production of zinc, copper, gold, silver, and lead in Peru's Sierra Central region. In addition to mining business, the company also operates ports, logistics companies and hydroelectric power plants in the country.

Located at Chancay Harbor in central Peru and about 58 kilometers from the country's capital Lima, Chancay terminal boasts an exceptional geographic location and is connected with the economic center of Peru by convenient traffic.

It is a natural deep-water harbor with a maximum of 16-meter water depth and is capable of meeting the needs of mega vessels.

The construction of Chancay terminal includes multipurpose terminals, container terminals and related infrastructure facilities. Phase one of the terminal will have four berths, of which two are multipurpose berths, and two are container berths with a total annual designed capacity of one million TEU, or twenty-foot equivalent units－an industry measure of cargo capacity.

Xu Lirong, chairman of China COSCO Shipping, said the business move in Peru, which covers the entire logistics industry chain, will not only embody the company's coordinated development, but also inject vitality into target countries and regions.

After the acquisition, COSCO Shipping Ports and Volcan can fully utilize their resources and capabilities to jointly build Chancay terminal into a major gateway port in Peru. It will facilitate trade between Peru and China, and between China and Latin America while creating jobs, services and infrastructure investment opportunities, said Li Guanghui, vice-president of the Chinese Academy of International Trade and Economic Cooperation.

Zhang Wei, vice-chairman of COSCO Shipping Ports, said the investment in Chancay terminal will enable the company to further extend its reach to South America. The terminal will also help cut Peru's deficiency in port infrastructure.

"The two companies will make full use of their advantages to build Chancay terminal into a key hub in South America, the most important logistics center on the Pacific coast, and a major platform that serves bilateral trade," he said.

COSCO Shipping Ports' terminal portfolio covers the five main port regions on the Chinese mainland, Southeast Asia, the Middle East, Europe and the Mediterranean. By the third quarter of 2018, it operated and managed 282 berths at 36 ports worldwide, of which 192 were for containers, with a total annual handling capacity of approximately 104 million TEU.