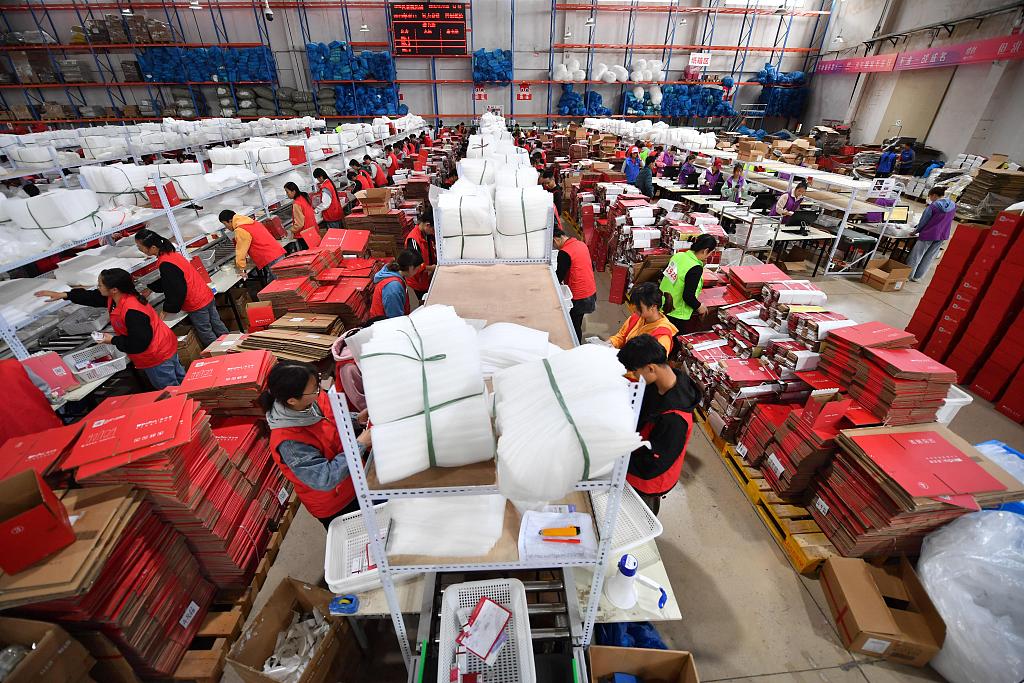 Chinese consumers on Monday defied rather gloomy forecasts for the country's economy amid a deep structural transformation and the US-initiated bruising trade war, as they splashed out more cash on China's e-commerce platforms within 24 hours than the full-year GDP of most countries and regions around the world.

Beyond the record-smashing sales figures, this year's Singles' Day shopping festival also showed positive developments such as an expanding consumer base at home and abroad, pointing to the massive potential of the Chinese consumer market and the solid foundation of consumption - the biggest growth-driver for the world's second largest economy, analysts noted.

Alibaba Group, which has been credited with turning a day for celebrating bachelorhood on November 11 into the world's largest shopping event, smashed several records it set last year.

Shortly after 4:30 pm, sales on Alibaba's Tmall reached 213.5 billion yuan ($30.5 billion), eclipsing last year's total sales with nearly eight hours still to go before the end of the sale. The value of sales by midafternoon was larger than last year's GDP of more than 100 countries, including Estonia, Iceland and Cambodia, according to World Bank data.

Apart from Alibaba and JD, more than 20 other online shopping platforms also participated in the online shopping spree fueled by attractive discounts on everything from food to clothes to cosmetics to healthcare services and promotional activities such as star-studded concerts and livestreaming shows with internet celebrities.

The record-breaking sales figures led by consumers wrestling over the biggest discounts offered a stark contrast to the rather grim outlook for the Chinese economy, which is under heavy downward pressure due to a profound structural transition toward a consumption- and innovation-driven economy and a costly trade war that the US has launched.

"This could be seen as one of the most encouraging signs all year. Chinese consumers are not holding back their spending despite the slowdown and the trade war," Liu Xuezhi, a senior economist at the Bank of Communications, told the Global Times on Monday. "As long as consumers continue to spend, internal demand will remain stable and so will economic growth."

Though the trade war may have impacted the Chinese manufacturing sector and exports - both key growth drivers - Chinese officials have often pointed to strong consumption as indicators of confidence in the economy. In the first three quarters of 2019, consumption contributed 60.5 percent of total economic growth in the country, according to official data.

If Singles' Day sales figures showed consumers are not afraid to spend, another recent event shows Chinese businesses are also not holding back. At the just-concluded China International Import Expo, Chinese and foreign companies inked intended deals worth $71.13 billion, up 23 percent from last year, official data showed on Sunday.

Behind the massive spending by Chinese consumers are rising disposable incomes and long-term job prospect, analysts said. In the first three quarters of 2019, per capita disposable income in China was 22,882 yuan, up by 8.8 percent year-on-year, official data showed. During the period, China added 10.97 million new urban jobs, accounting for 99.7 percent of the government's annual target.

Record sales during the Singles' Day also highlighted the steadfast expansion of the Chinese e-commerce network both domestically and internationally through innovations in technology and supply chain, according to Lu Zhenwang, founder of Shanghai Wanqing Commerce Consulting.

"The most promising aspect of all this is the reach of the e-commerce sector which continues to expand to more parts of the country and even overseas and could guarantee a high rate of growth in online consumption in the coming years," Lu told the Global Times on Monday.

Earlier data also showed that spending by consumers in the island of Taiwan, Hong Kong and Macao was grew the fastest in the country, followed by less developed places such as Southwest China's Tibet Autonomous Region and Central China's Henan Province.

On Alibaba's platforms, more than 500 million shoppers participated in this year's sales event, 100 million more than last year and about 70 percent of the new users are from smaller cities, the company said. JD also said that membership for its PLUS shoppers club reached 15 million on Monday.

"It might be a slow process, but the overall direction for the Chinese e-commerce sector is going global," Li Chengdong, an independent industry analyst, told the Global Times on Monday.