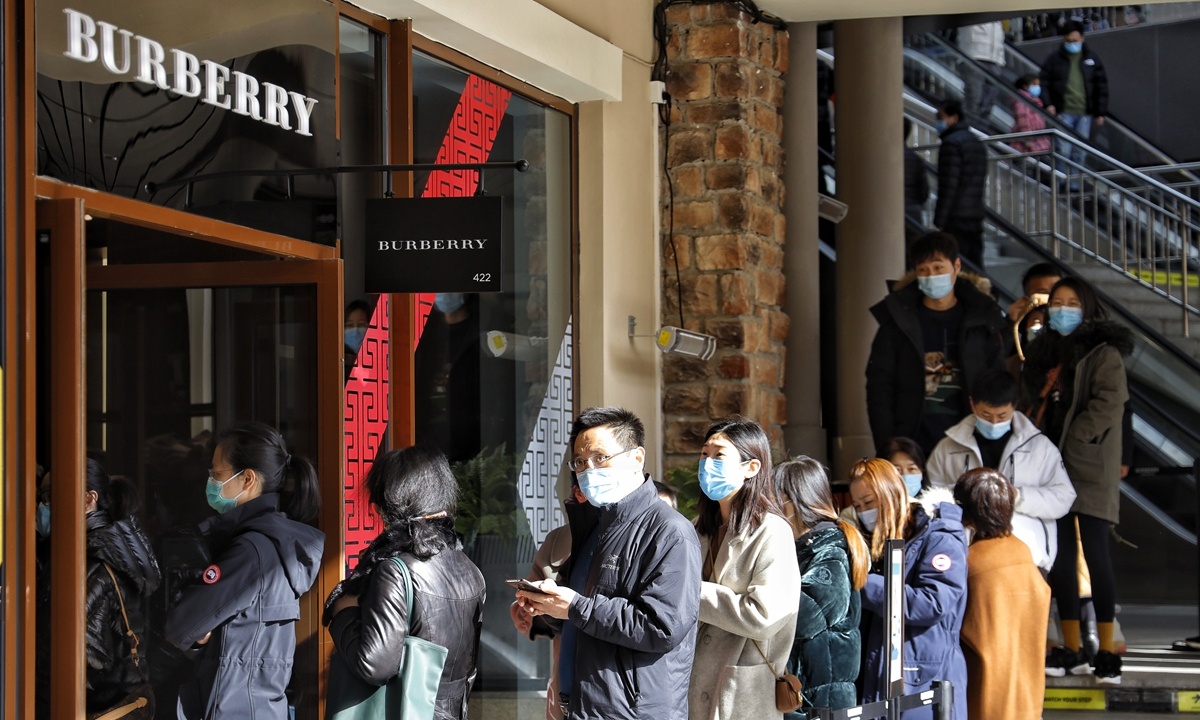 People wait in line outside a Burberry store in the Badaling Outlets shopping plaza on Feb 6. Photo: Li Hao/GT

From long queues to get into luxury shops to purchases of gold accessories and expensive hotel bookings, China saw a boom in spending by consumers with deep pockets during the weeklong Spring Festival holiday, leading experts to predict an annual growth rate of up to 7 percent in consumer spending for 2021.

During the Spring Festival holiday – when Chinese consumers traditionally open their wallets - there have been ten-meter-long lineups to get into some stores selling expensive designer goods in major cities like Beijing and Shanghai, continuing the holiday spending spree.

“The queues have lasted for months and we have taken measures to limit the number of shoppers,” a shopping assistance at a Louis Vuitton store in Shanghai told the Global Times on Saturday, adding that consumers have to wait in line for more than half an hour on average.

Consumers also spent lavishly on costly items and services such as gold accessories during this year's Spring Festival.

Booking for high-end hotels rose more than 160 percent year-on-year during the Spring Festival, data from Chinese travel platform Fliggy showed. The hospitality sector suffered during the initial outbreak of the coronavirus in January 2020.

A Shanghai resident surnamed Chen said that he bought a luxury handbag for his wife and a golden necklace for his mother for 36,000 yuan ($5,576) during the Spring Festival.

“My family used to travel overseas during the Spring Festival, but we canceled travel plans this year and decided to buy some gifts instead," he told the Global Times.

Holiday spending was mainly unleashed by China's efforts to discourage people from traveling during the Spring Festival, Zhao Ping, vice president of the international trade department at the China Council for the Promotion of International Trade, told the Global Times on Saturday.

The strong consumer spending also drove up demand for imported food and products. Cassava imports from Vietnam were up by 120 percent in January as Chinese people celebrated the Lunar New Year with traditional home cooked banquets.

Zhao predicts that consumer spending will continue to pick up, and will grow between five to 7 percent in 2021.

“Currently, the growth rate and scale of commodity consumption have exceeded the level before the epidemic and there will be a quick rebound in the movie and catering sectors after COVID-19 vaccines become widely available,” Zhao said.