In spite of the escalating trade war between China and the US, Chinese consumers have a rational attitude toward one of the most iconic American products - Apple gadgets - and they have been waiting impatiently for new iPhone models. 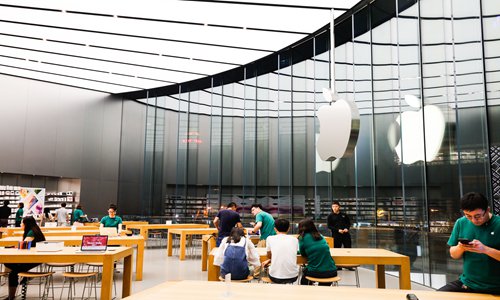 Consumers try Apple's products in an Apple Store in Nanjing, capital of East China's Jiangsu Province in May. (Photo: VCG)

Analysts said the US technology giant will continue to lose ground in China, however, unless it comes up with more innovative products.

Apple has scheduled an event for September 12 when the company is to release three new gadgets including 5.8-inch and 6.5-inch iPhones, which will both be called iPhone XS, according to industry news site 9to5mac.com on August 30.

Several employees at an Apple store in Beijing's Chaoyang district told the Global Times on Thursday that although the pre-ordering date for the new iPhones in China has not been decided yet, many Chinese consumers came to the store in recent days to ask for more information.

China was the third-largest market for Apple worldwide in 2017 in terms of net sales, which accounted for 20 percent of its total net sales, the company's annual financial report showed.

The company's success can be explained by its compelling user experience and innovative interface. However, it has been losing ground to Chinese competitors such as Huawei, OPPO and vivo.

Huawei led the Chinese smartphone market with a 26 percent share in the second quarter of 2018, with OPPO ranked second at 19 percent and vivo third at 18 percent. Apple had 8 percent of the market, ranking it No.5, global industry consultancy Counterpoint Research said in a report released in May.

China and the US are locked in a tit-for-tat trade battle, with US President Donald Trump reportedly pushing advisors to impose tariffs on another $200 billion worth of Chinese goods as early as next week.

However, unlike the period in which China had disputes with South Korea over the US Terminal High Altitude Area Defense system, which prompted some Chinese consumers to boycott South Korea's Lotte Group, Chinese consumers are showing a rational attitude toward some quality US products.

"I won't give up on Apple's products, and it has nothing to do with the trade war. It depends on whether it [Apple] has improved its customer experience," said a Beijing-based consumer surnamed Yang, who works in the internet sector.

Among dozens of Chinese consumers ranging from 30 to 50 years old, only few said they would not consider Apple products anymore. "I used three iPhones before but later I switched to Huawei for its powerful photography technology," said a Beijing-based female user surnamed Liu.

The so-called "negative backlash" caused by the ongoing trade war isn't having much impact on consumers when they decide whether buy Apple or not, Wang Xi, an industry analyst at International Data Corp, told the Global Times.

"Consumers are price sensitive, which has a direct impact on Apple's sales. Although two tariff lists do not include the smartphone category, currency exchange rates and supply costs of some components will weigh on gadget prices," Wang said.

The US company has seen its growth in the Chinese market slow down in recent years, and "without the iPhone X released last year, it would have seen a sharp decline," said Liu Dingding, a Beijing-based independent expert.

IPhone models offered little innovation since the release of the iPhone 4 - the biggest leap of its gadgets, Liu told the Global Times Thursday.

"Apple's weakening innovation capability led to losses in market share in China, which would be amplified by the trade war," he said.