Aims to sell alternative-fuel models at price of conventional vehicles 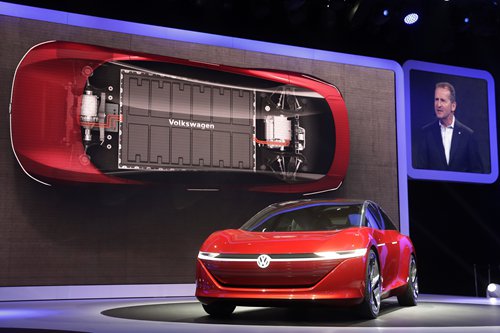 VW's push into volume production of electric cars comes as rival Tesla struggles to scale up manufacturing of its Model 3, which is also aimed at the mass market.

After its emissions scandal broke in 2015, Europe's largest automaker by sales unveiled an ambitious plan to become a world leader in green transport and deliver 1 million VW-brand electric vehicles (EVs) a year by 2025, based on a platform called MEB.

Efforts by China, the world's largest auto market, to tackle air pollution have helped trigger a surge of investment in the EV sector, cutting battery prices while raising the German brand's optimism on the appeal of the technology.

"One could argue that we will well exceed the 1 million [target] from the MEB," Christian Senger, head of electric mobility at the VW brand, said in an interview.

In April, Volkswagen and its joint-venture partners announced that they will invest 15 billion euros ($18.3 billion) in developing new-energy vehicles and self-driving cars by 2020.

It plans to roll out 15 new car models in China by 2020 and launch 40 new-energy vehicle models for the Chinese market by the end of 2025.

The company will start local production of battery-electric cars in at least six factories in China by 2021, said Herbert Diess, the new CEO of VW.

Other German carmakers are also investing heavily in EVs.

For example, BMW said recently that it would start mass producing electric cars in 2020, while Daimler's Mercedes-Benz Cars plans to launch more than 10 EV models by 2022.

Senger said latest signs that demand could beat expectations come from national sales organizations such as Moeller Mobility Group in Scandinavia, which distributes VW cars across markets and regions.

"In the cycle plan where we again and again undertake forward planning for up to 15 years, we see that the markets even want more [electric] cars than we have earmarked."

Besides Europe, China and the US, VW sees additional potential in other regions including South America that are not reflected in its sales targets, Senger said.

He also said VW needs to gauge whether its battery production capacity would allow it to serve demand in the Southern Hemisphere at all.

To stoke mass demand, VW is aiming to sell its EVs at the price of conventional combustion engine cars, drawing on MEB synergies and falling battery costs, Senger said.

Designed to underpin nearly 30 battery-driven models from four group brands, ranging from the Golf-size I.D. hatchback to the Vizzion sedan, the MEB platform will allow the VW group to cut production costs due to economies of scale.

VW group has a goal of selling 3 million EVs by 2025, including models from premium brands Audi and Porsche, and Czech division Skoda.

Waiting times for the E-Golf have grown to more than 12 months after state and industry-backed incentives led the model's price to drop by about one-third to about 25,000 euros, according to VW.

Not everyone shares the company's confidence.

VW's works council has repeatedly warned against EV "hype" and said greater progress on setting up charging stations will be key to meeting VW's sales goals.

In Germany, two-thirds of 1,800 respondents to a March survey by advisory firm Deloitte said they would opt to buy a combustion engine car as their next vehicle, with 23 percent favoring hybrids and only 7 percent an all-electric model.

"EVs are only competitive with large subsidies and there are still question marks over driving range and charging networks," said an analyst who declined to be identified.

But Senger was unfazed.

"We are looking at growth rates here that we have in no other product," he said. Demand is always volatile, "but the indicators we have show that it [beating the 1 million goal] can work."