A recovery for the pandemic-hit global aviation industry is still far away, however, more data and airline performance indicators show that the Chinese mainland has led the global recovery in the sky. 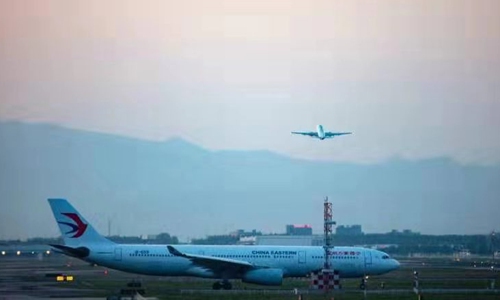 Data from information provider VariFlight sent to the Global Times on Wednesday shows that the volume of domestic flights has almost reached the normal level from before the virus, although there is about a 10-percent gap.

The Chinese market's performance comes in contrast to the figures from the International Air Transport Association (IATA) on Tuesday, which show that the recovery in global traffic has been slower than expected, and global passenger traffic, which is measured by revenue passenger kilometers or RPKs, will not return to pre-COVID-19 levels until 2024, a year later than previously projected.

Further, the recovery in short haul travel is still expected to happen faster than for long haul travel. As a result, passenger numbers will recover faster than traffic measured in RPKs.

Passenger traffic hit bottom in April, but the strength of the upturn has been very weak. What improvement there has been is in domestic flying, said Alexandre de Juniac, IATA's Director General and CEO.

IATA's data showed that China's carriers continue to lead the recovery, with traffic down 35.5 percent in June compared to same month in 2019, although an improvement from the 46.3 percent decline in May.

The data is in line with the pace of the resumption of work and the gradual recovery of travel confidence in China, which spurred the recovery of domestic airlines.

The number of takeoffs and landings in China in June has returned to about 70 percent of the same period last year, and the upward trend has not declined.

China Eastern Airlines said at present, the number of its domestic flights has recovered from the lowest level of more than 200 flights per day to more than 2,000 flights, just over 80 percent of the pre-pandemic figure.

The number of seats sold by China Southern Airlines in May exceeded that of American Airlines, making it the world's largest airline that month.

In comparison, the US began to gradually open up and resume production in May, and the number of takeoffs and landings in June returned to about 35 percent of the same period last year, relying on the domestic route network.

Unlike the Chinese mainland, the recovery rate in the US has slowed due to the virus. The capacity of flights in July has been hovering at the level of about 45 percent in the same period last year, VariFlight data showed.

However, outbound flying in China is still in a difficult situation, impacted by the lockdown.

IATA said June international traffic shrank by 96.8 percent compared to June 2019, only a slight improvement over a 98.3 percent decline in May year-on-year.

VariFlight data said that the passenger volume in China is far lower than last year, and the current RPK is only about 65 percent of last year's figure.