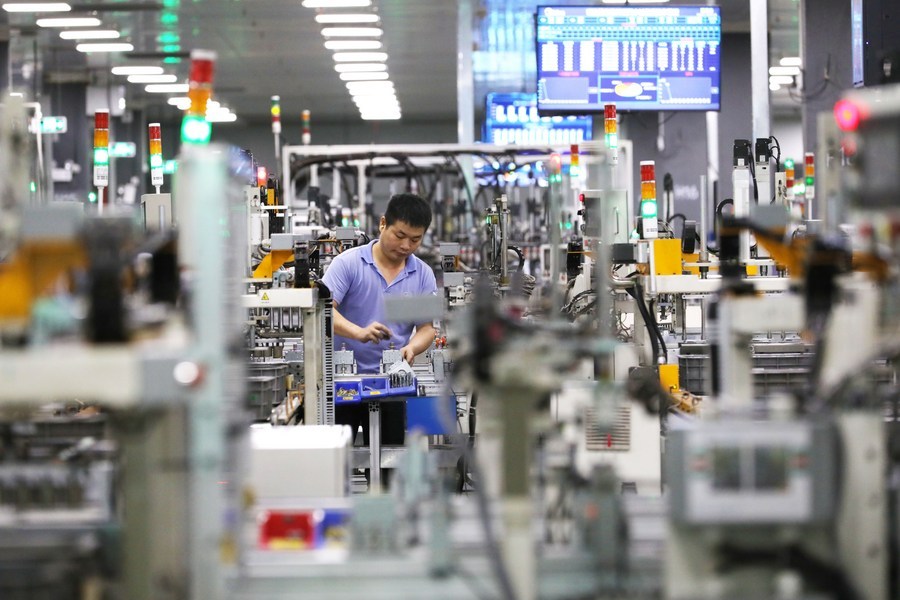 China's economy maintained its recovery streak in July, despite challenges posed by the resurgence of COVID-19, extreme weather and external uncertainties.

China's industrial production continued its expansion, with the value-added industrial output, which measures factory activities, rising 6.4 percent year on year in July, according to the National Bureau of Statistics (NBS).

The figure was up 11.5 percent from July 2019, bringing the average growth for the past two years to 5.6 percent, NBS data shows.

During the January-July period, China's fixed-asset investment increased 10.3 percent year on year, with the average growth rate over the last two years at 4.3 percent.

The country's retail sales of consumer goods climbed 8.5 percent year on year in July, resulting in an average growth of 3.6 percent over the past two years.

Floods and the resurgence of COVID-19 restrained industrial production to a certain extent, while the resumption of quarantine measures in some regions affected the recovery of consumption related to tourism, catering and other services, said Wen Bin, chief analyst at China Minsheng Bank.

In general, the cumulative growth rate of major macroeconomic indicators remained at a reasonable level, although growth in some areas of the consumption and services sectors slowed last month due to high temperatures, heavy rainfalls and sporadic COVID-19 outbreaks, said NBS spokesperson Fu Linghui.

In July, the surveyed unemployment rate in urban areas was 5.1 percent, up 0.1 percentage points from June, but lower than the rates registered in the same period in 2020 and 2019.

Fu expects China's economy to continue its steady recovery in the second half of the year, with major macro indicators remaining within a reasonable range and the quality of development further improved.

Fu is optimistic about the country's future consumption. The expansion of vaccination campaigns and targeted COVID-19 prevention and control measures will stabilize the market, while the increased job opportunities and household incomes will drive up consumption, he said.

In terms of industrial production, Fu highlighted the fast expansion of China's high-tech manufacturing sector against the backdrop of the country's increasing resilience in innovation-driven development.

In July, the sector's output expanded 15.6 percent from the same period last year, resulting in an average growth of 12.7 percent over the last two years.

Cautioning that there are increased uncertainties in global economic resumption and challenges to domestic economic recovery, Fu said that measures will be taken to implement the cross-cycle adjustment of macro policies, tap into the potential of the domestic market, and keep the economy operating within an appropriate range.

More efforts should be made to boost domestic demand further, improve the role of infrastructure investment in stabilizing investment and growth, and ramp up support for manufacturing, micro-, small- and middle-sized enterprises, as well as inclusive and green finance, Wen said.