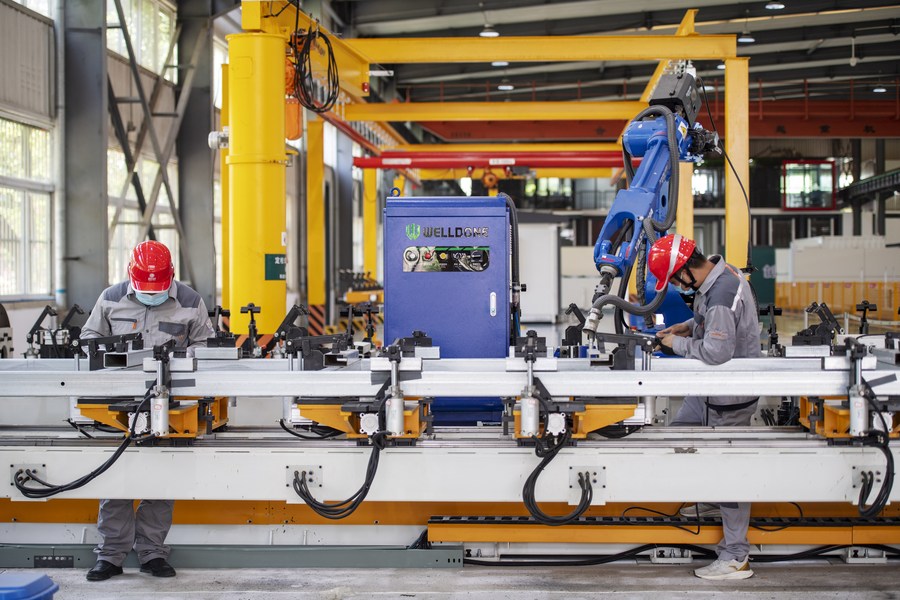 BEIJING, May 27 (Xinhua) -- Despite key indicators suggesting downward pressure on the Chinese economy, new investments continue to flow into the world's second-largest economy, seeking opportunities that businesses believe are irreplaceable for their long-term strategic development.

Observers say that China's economic outlook remains robust due to its strong resilience and ample potential despite the Omicron resurgence and external headwinds. The fundamentals sustaining its sound growth remain unchanged.

On a monthly basis, the consumer price index inched up 0.4 percent partly due to the domestic resurgence of COVID-19 and the continuous rise of bulk commodity prices across the globe, noted Dong Lijuan, a senior statistician with the NBS.

The International Monetary Fund has slashed the global growth forecast for 2022 to 3.6 percent amid the Russia-Ukraine conflict, 0.8 percentage points lower than the January projection, according to its World Economic Outlook in April.

Liao Tianshu, chairman of BCG Greater China, told Xinhua that China's economic growth in the first quarter was in line with expectations, considering the impacts of the Omicron resurgence on the economy.

"Although downward pressure has increased, the impacts are short-lived and external," she added.

China's economy is expected to improve in May with the accelerating resumption of work and production in Shanghai and Jilin and the implementation of pro-growth measures, Fu Linghui, a spokesperson for the NBS, has said.

"The fundamentals of the Chinese economy remain unchanged. The overall trends of economic transformation and upgrading and high-quality development remain unchanged," he said.

The spokesperson listed favorable conditions for stabilizing the economy, such as a super-large market, complete industrial and supply chains and huge domestic demand.

Observers said China will continue to deepen reform and expand opening-up, which is a fundamental driver of China's long-term growth.

"Looking ahead, opening-up remains the defining feature of China's high-quality development," Liao said. "As China moves from high-speed growth to high-quality growth, there will be many opportunities in terms of technology, talent, common prosperity and green transition."

"In recent years, the transformation and upgrading of China's economic structure has also supported the high-level opening-up of the financial industry," Iiyama said.

Iiyama said China's building of a multi-layer capital market system and the further reform and opening-up of the financial industry provide more and more opportunities to foreign financial institutions to achieve more significant development and growth in China.

According to a business confidence survey 2021/22 conducted by the German Chamber of Commerce in China, 71 percent of German companies intend to increase their investments in China.

A similar report released by the American Chamber of Commerce in China (AmCham China) said nearly two-thirds of companies rank China as the top or a top-three priority for near-term global investment.

The 2022 American Business in China White Paper, released by AmCham China, noted that China's market also has a robust research, development and innovation ecosystem. Many leading American companies generate a substantial portion of their revenue from the Chinese market.

Emerging industries have demonstrated their resilience during the COVID-19 pandemic. In the first quarter of 2022, official data showed that foreign investment in China's high-tech industries logged a sharp yearly increase of 52.9 percent.

Kurt Wee, CEO of Celligenics Pte Ltd., a Singapore biotechnology firm specializing in regenerative science, encouraged foreign businesses to maintain a sense of optimism and establish a footing in China.

"China will continue to gain pace in sophistication and in development," said Wee. "It's a lifetime opportunity when you have such a huge market developing at this pace."