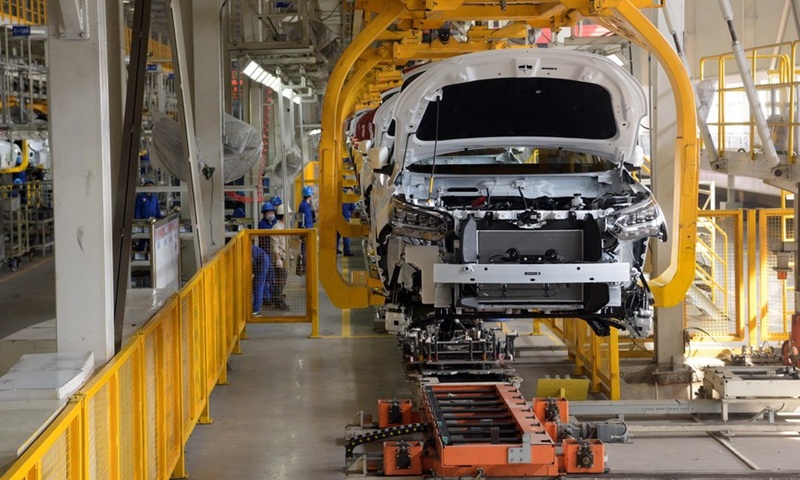 Chinese electric vehicle (EV)-related shares rallied on Wednesday, after US President Joe Biden appears to be recognizing China's lead in the EV sector as he sought to pitch a massive plan to boost US' EV industry to compete with China.

While Biden was trying to highlight the urgency for the US to step up its EV development, his remarks prove to be a boost of confidence in major Chinese EV companies, which, analysts say, have gained an overwhelming edge across the industry chain that US firms may not be able to challenge in the short term.

On Wednesday, BYD delivered its millionth NEV in Shenzhen, South China's Guangdong Province to Mario Ho — the son of Macao tycoon Stanley Ho Hung-sun who passed away last year - making it the first homegrown EV producer to hit such a milestone, the company confirmed with the Global Times.

BYD's founder Wang Chuanfu said at the launch ceremony that the firm will speed up its international push. It is expected that its Tang series of EV models, powered by BYD's new ultra-safe Blade Battery - which some have described as a game changer for the EV industry - will be shipped and sold in Norway this year.

To many in China, Biden's speech on Tuesday (US time) reaffirmed China's lead in the NEV industry. During his visit to Ford's Electric Vehicle Center in Michigan, Biden said that China has the largest manufacturing scale and is "exporting electric vehicles around the world with sights on the American market."

"They think they are going to win... We can't let them," Biden said, indicating that the US is facing a crisis of lagging behind China in the global NEV race. The speech was part of Biden's ongoing pitch for his $2.3 trillion infrastructure package, including $174 billion for building EVs.

Industry observers said that while Biden's comments were motivated by politics, they also underscored a widening gap between the world's two largest economies in terms of EV development.

In the three critical technologies for EVs -batteries, intelligent networking and intelligent driving - China basically leads the US in the first two sectors, Mei Songlin, a Shanghai-based veteran auto analyst, told the Global Times on Wednesday.

The edge comes from an early start, China's sheer market size, and an early commercialized 5G network, according to Mei.

For example, in the niche sector of human-machine interaction - a system that includes voice instruction, navigation and entertainment - US automakers are behind Chinese competitors by about three to five years, Feng Shiming, a car analyst, told the Global Times on Wednesday.

It is undeniable that the US has an advantage in intelligent and autonomous driving, but this edge won't threaten China's global lead, according to analysts. Mei added that Chinese NEV start-ups are doubling down on their efforts to climb up the tech ladder.

The US market share of EV sales is only one-third the size of the Chinese EV market, website Marketwatch reported, citing a White House document.

In the global EV battery market, CATL was the No.1 supplier in January, with a 31.2-percent share. The second and third spots were held by South Korean battery maker LG Energy Solution and Japan's Panasonic.

US companies were absent from the top five.