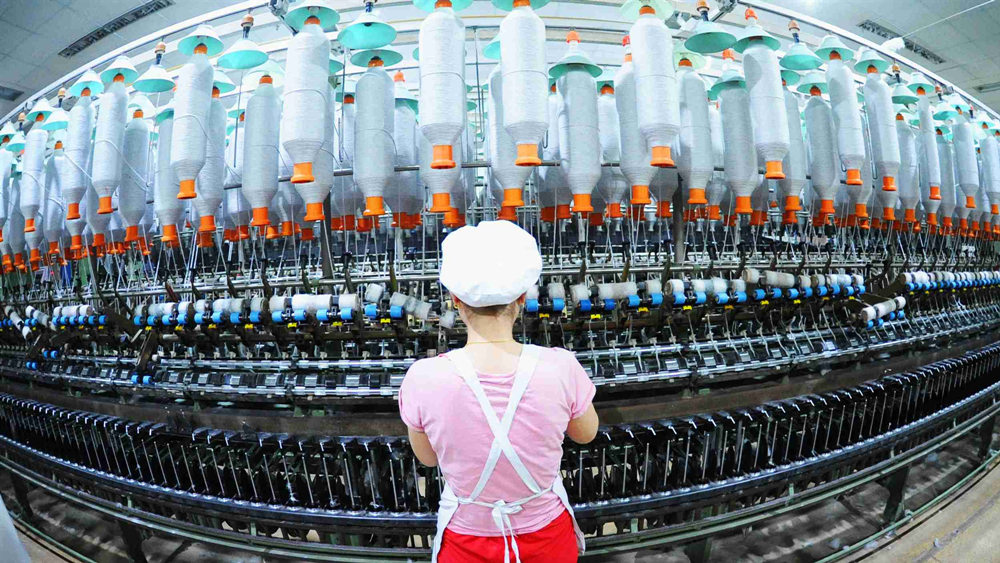 Caught in an uncertain trade environment where tariff hike threats are yet to be defused, Chinese firms have started to fine-tune their business plans for more predictable growth.

Guangzhou Seagull Kitchen and Bath Products, a manufacturer of high-end and customized bathroom facilities in southern China's Guangdong Province, expected the proportion of its exports to total sale volume down to 60 percent this year from 69 percent in 2018.

The shift is not due to decline in export orders, but rapid growth in the local market, said Joe Chen, vice president of the company.

The United States has been the company's biggest overseas market, accounting for almost half of its exports, but Chen said the trade frictions would have limited impact on the company in the short run.

"It's not realistic for our clients to shift to other countries' suppliers as the process takes at least three years because of the complex supply chain," Chen said.

In the long term, the company will strive to provide more advanced products to the domestic market to meet increasingly sophisticated consumers demands, Chen said.

To cope with the rising domestic demand, the company has planned to quadruple its production capacity of prefabricated bathroom and kitchen, a key product in the domestic market, and establish new sites by the end of the year.

From 2016 to 2018, the company saw its exports to the United States rise by 12.5 percent, while sales in the Chinese market nearly doubled.

Such a change reflects the decreasing reliance of the United States as China's export market. In early June, China's Vice Commerce Minister Wang Shouwen said the U.S. tariff hike will have some impact on China's foreign trade, but is generally controllable.

Official statistics from China showed that the U.S. share of China's total exports shrank from 22 percent in 1999 to 16 percent now.

Analysts said that the tariff tension provoked by the United States, if not defused, might further diminish the appeal of the U.S. market to Chinese manufacturers, and sour Sino-U.S. business collaboration along industrial chains.

One of the binding agents to cement the cooperation between Chinese and American firms, however, is China's vast domestic market where demand for better quality goods keeps surging.

Harley Seyedin, president of AmCham South China, told Xinhua that U.S. firms were not pulling out of China under trade tensions as the country's consumer market is just too big to lose out on.

"I don't know a single company or member who has left China," he said, adding that the Chinese economy is growing at a relatively fast pace, creating consumer demand and investment opportunities.

Automaker Tesla and German chemicals giant BASF, for instance, have ramped up their investment in China this year, according to the Ministry of Industry and Information Technology.

In the past five months, the total foreign investment actually utilized by the country stood at 369.06 billion yuan (about 55 billion U.S. dollars), up 6.8 percent year on year, with some 16,460 foreign-invested firms newly established.

Research and Innovation as Priority

If the prolonged Sino-U.S. trade tension had given Chinese firms anything as a lesson, local firms said it would be the significance of research and innovation and being technically competitive.

On May 10, the United States announced a decision to increase additional tariffs on 200 billion U.S. dollars worth of Chinese imports from 10 percent to 25 percent.

"The additional 15-percent tariff hikes came unexpectedly, many of our customers felt at a loss. But it is no easy rebuilding industrial chains elsewhere as lots of raw materials and technologies have been involved," said Lao Jiewei, secretary of the board of directors of Golden Sea, a Guangzhou-based professional lighting provider.

What the 1,000-employee company could do, he said, was to increase efficiency and retain the competitiveness of its products by fostering new technical advantages.

"Our research investment accounts for around 6 percent of our sales revenue and we will continue to increase it so our products remain competitive in the market," Lao said.

In addition, the company has more than one-tenth of its employees engaging in research and creative design.

As tariff uncertainties hurt market confidence and new orders, Lao said a proper solution would be good for both countries.

If no solution were reached, and the Chinese and U.S. economies were decoupled, local manufacturers said they would have a chance to gain back the more profitable market share acquired by established American brands by providing products with higher cost-effectiveness.

In the long term, the tariff war is an opportunity for export firms to better tap the domestic market and the markets beyond the United States, said Joe Chen.