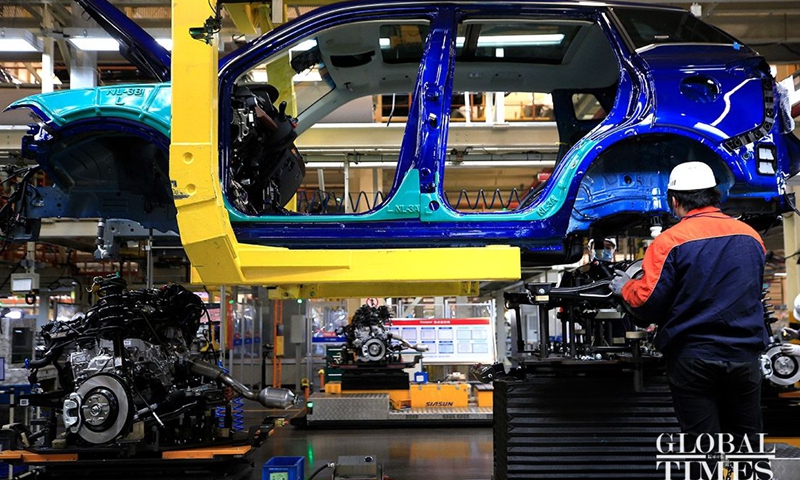 Beleaguered Chinese exporters are making shrewd moves to focus more on the domestic market and turn the coronavirus pandemic into an impetus for their climb up the value chain.

This is the overwhelming view expressed in Global Times interviews with executives and government officials in East China's Zhejiang Province, which exemplifies the nation's export-oriented economy.

Ningbo, a port city about two and a half hours' drive from Shanghai, is a manufacturing and export hub with more than 20,000 export-oriented companies. It has trade links with more than 220 countries and regions.

With the coronavirus outbreak evolving into a pandemic that has shut down much of the global economy, the plight of many local exporters is dire.

Ningbo Deying Motor, a major generator manufacturer in East China that booked 200 million yuan in sales last year, told the Global Times that it has been operating at full speed since the prolonged Spring Festival holidays.

The shutdown of ports overseas has led to a suspension of many orders since April, dampening the outlook for exports, according to Zou Lieting, general manager of Ningbo Deying Motor. His company, serving mainly US and European clients, may put new investment and hiring on hold.

"Cixi, Ningbo, and the entire Zhejiang Province resumed production with the aggressive joint efforts of the local government and enterprises. They hired experienced workers from around China as the epidemic waned and brought them in with chartered planes, trains and coaches and gave cash incentives," Zheng Dengke, chief of Xiaolin Town in Cixi, Ningbo told the Global Times.

"The main challenge now is what those workers will do as overseas demand disappears?" asked Zheng.

At Ningbo DEGSON Electrical Co, a major terminal blocks and industrial electrical connection products manufacturer in Asia, the workers are mostly from nearby provinces such as Anhui, Henan and Jiangxi.

The company had more than 1,500 workers prior to the Spring Festival holidays, but less than 200 returned on February 17, the first working day after the long holiday, according to Gan Wenxue, vice director of international sales.

As of April 7, the headcount exceeded 1,700, as measures to speed work were put into effect, Gan told the Global Times.

Non-locals were offered 1,500 yuan each as an incentive to return while locals were given 500 yuan, she said.

Based on self-developed innovative products and high quality, new orders rose 30 percent year-on-year in the first quarter, which was a record, Wang Yuhang, CD marketing director from DEGSON said. This compared with average quarterly growth of 15 percent.

The company is making electronics components for ventilators, as well as face mask production machines, amid the global fight against the pandemic.

More importantly, the local push for a shift toward internal trade will help companies offset overseas trade declines due to the pandemic.

"We have sufficient supply and production capability, but demand from overseas has vanished … and previous orders were suspended or delayed. It's high time for exporters to target the domestic market," Li Xujun, director of the foreign trade division of the Mechanic and Electronic Import and Export Office under the Ningbo Municipal Bureau of Commerce, told the Global Times.

Online and offline events are being held to help local firms clear products stranded at warehouses or local ports because of contract breaches by foreign clients.

"It's not a bad thing for domestic consumers to buy high-quality products at lower prices, improving their life quality," Li said, adding that Chinese e-commerce platform Pinduoduo and short video apps Tik Tok and Kuaishou will join the campaign.

Town chief Zheng said that "it's a reshuffle opportunity to eliminate those non-core businesses, and to integrate and optimize promising enterprises. Use this chance to improve automation … that's a lesson enterprises should learn from the COVID-19 epidemic. Their general competitiveness will be upgraded if they don't rely on workers that much."

A transition from exports to the local market can't be taken for granted, local officials said.

"It's not a new concept to encourage Chinese exporters to turn to the huge domestic market" said Pan Xiaofeng, division chief of the integrated research office of Ningbo Municipal Bureau of Commerce.

"Although China officially promoted the 'three same' campaign as early as 2015, only few exporters seriously and persistently implemented it," said Pan.

Exporters get the orders, make the products and receive letters of credit, which become revenues. They also have support policies including export credit insurance and local governments' easy customs clearance.

"But domestic trade is far too complicated," Li said, citing such issues as brand building and sales-channel exploration.

"There is the infamous triangle debt that made producers unable to receive money direct from buyers in domestic trade. There isn't a similar credit insurance guaranteeing domestic trader producers' capital interests when problems occur," he went on to say.

"That's why 90 percent of exporters are reluctant to shift to the domestic market although demand is huge. Many try but they eventually return to export business. They know that business well, although the profit margin narrows year on year," Li said.

Only by getting rid of unreasonable formalities will domestic business be as easy as foreign trade, and then some of the battered exporters will be reborn, officials argued, adding  an upgraded industry chain in China will benefit consumers, businesses and the nation too.