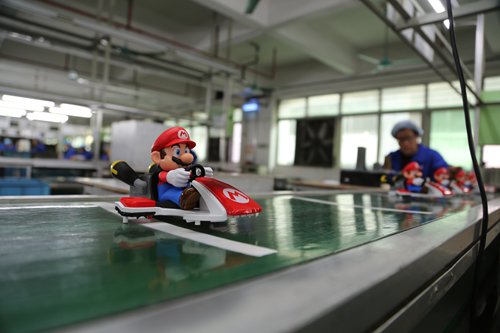 With his wrinkled hands, a worker surnamed Gao in his 50s stacked red kerchiefs decorated with floral patterns every day for almost a year in a factory in Yiwu, East China's Zhejiang Province, but he has no idea what these products are made for. His co-worker, who stood in a packaging section, attached small tags to these red kerchiefs that say Old Navy — an American clothing and accessories retail brand owned by Gap Inc that operates thousands of stores in the US."I don't know where these products will be sent to," Gao told the Global Times. Before moving to the next section, he carefully looks to see if there are any defects, which may affect the sales of the American brand for upcoming summer season in 2019. Yiwu-based Xize Fashion Scarf produces millions of scarfs every year and ships them to countries including the US, Germany, UK and France. As a major original equipment producer (OEM) for American brands such as Gap, Macy's and French firms Camaieu and Gemo, Xize is among hundreds and thousands Chinese factories in southern China, an area known as the factory of the world. 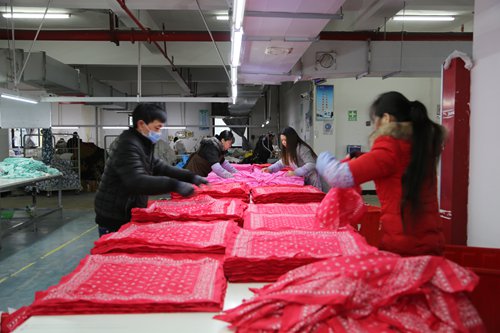 Workers are stacking red kerchiefs at a production line of Yiwu-based Xize Fashion Scarf, which works as original equipment manufacturer for US companies like Gap and Macy's. Photo: (Global Times)

The total foreign trade volume of Yiwu accounted for nearly 9 percent of the total trade volume of China in the first half of 2018, according to official data.About 1,100 kilometers away from the city, which is also home to the world's largest wholesale market, some factories in Dongguan, a manufacturing hub in South China's Guangdong Province, are making a variety of products for American consumers ranging from tablecloths to toys for children. In Botex Daily Products Manufacturing's plant in southern Dongguan, dozens of workers are packing grey woolen slippers that will be later sold at US wholesale chains such as Costco and Wal-Mart at retail price of $25 per pair. "We export about HK$70 million ($8.93 million) worth of daily products every year, and 70 percent of our products are shipped to the US," Li Zhijie, general manager of the company, told the Global Times. Part of American livesMobile phones and other household goods make up the largest single category of US imports from China, accounting for $70.4 billion in 2017, according to Reuters' calculation citing the US Census Bureau."I buy made-in-China things at random, the quality is usually very good," said Caroline Ianneta, a resident living in Long Island, New York, where several wholesale markets such as Target and HomeGoods sell countless products imported from China.During the past holiday season, Ianneta said she had got Chinese-produced gifts for Thanksgiving and Christmas, such as clothes and housewares. China has been the largest supplier of daily goods to American consumers for many years. "Some Chinese goods — including cheap plastics and toys — were around in my house long before I was born," Parker Brown, who is from Arizona and now lives in New York, told the Global Times. "I'll buy household goods, incense, clothes, and other things from China," he said. While the US imported approximately $522 billion worth of goods from China in 2017, an escalated trade war between China and the US has been disrupting the supply chain in 2018, and some Chinese entrepreneurs are now reconsidering the way of doing business with the country on the other side of the Pacific Ocean. Price to payBeijing and Washington announced they would impose tranches of tariffs on each other in 2018, and tariff lists covered thousands of specific items. The Trump administration first authorized tariffs of 25 percent and 10 percent on steel and aluminum imports in March 2018 and then slapped a 25 percent tariffs on $50 billion in Chinese goods in last June. Three months later, the US government raised the stakes by announcing 10 percent tariffs on $200 billion in Chinese goods, and planned to hike the rate to 25 percent at the beginning of 2019, though the two sides have agreed to have a 90-day truce.In Dongguan and in Yiwu, Chinese manufacturers have been keeping a close eye on what is now happening the 90-day truce between the two countries. With some workers putting together components for a Super Mario race car toy, CH Kwok, general manager of Dongguan LC Technology Co, was considering how to remain competitive even with increased tariffs on Chinese-made goods. The company had engaged in producing for American brands in Dongguan since 1990s. The OEM exports millions of dollars worth of products every year to the US for companies such as Kid Galaxy and Mattel.

"It's up to our American buyers whether they would pay more tariffs or not," Kwok said, noting that the business has such low profit margins that it could not be able to bear a significant burden like tariff hike. When US companies have to pay more to purchase goods from China, it is directly reflected in retail prices. Some US consumers are already seeing higher prices on some products. "We hope the US and China will negotiate a positive resolution that improves our trading relationship and avoids further tariffs, which are ultimately taxes paid by American businesses and consumers," Jonathan Gold, vice president of supply chain and customs policy of the National Retail Federation, told the Global Times. Trade helps provide a wide range of products to consumers at prices they can afford, lowering the cost of living for American families, he noted. "Trade barriers such as tariffs are taxes that drive up prices and limit the availability of consumer products," he said. Prepared for the worst Some Chinese factories have seen their products included into the tariff lists, and others have not been affected yet. As businesses hope for the best outcome from the ongoing US-China trade talks, some have been reorienting their focus to the domestic market or shifting some orders to their affiliates in Southeast Asia and South Asia. Zhu Haishan, chairman of Zhejiang Jiabolang Blanket and Carpet Co, has lately been studying a proposal from the local government for the purpose of supporting local private companies, as they have seen growing challenges since 2018. "Small- and medium-sized enterprises lack capabilities to adjust to a changing environment and diversify their supply chain. That makes them more vulnerable amid a trade war," Zhu said.In a manufacturing plant that produces about $10 million worth of carpets every year for household use, nearly one-third are shipped to the US, and this portion of the products is now facing a 10 percent tariff increase, according to the businessman.  "In our case, factories are the ones paying for higher trade barriers, and the impact will become much more apparent in 2019," he told the Global Times.With lingering uncertainty over the outcome of trade talks, some factories said US buyers have already halted making new orders in recent months, which weighed on overall confidence and forced them to restructure their business plans. "We're now considering expanding our sales channels to the domestic market," Zhu noted. Some labor-intensive industries such as textiles and toy manufacturing have been moving out of China in recent years due to rising labor costs. And a recent report from UBS suggested that the majority of exporters have already made efforts to shift at least some production operations out of China as threats from the US-China trade war impact their businesses. For some manufacturers who have been investing for decades in the country's manufacturing hubs, leaving China is not the best option to get prepared for the worst scenario amid escalated tensions between the two countries. "Some of my friends went to invest in Vietnam, but they faced higher procurement costs, as many raw materials had to be shipped there from China," Jason Ye, general manager of Dongguan Yimei Houseware Co, told the Global Times. It usually cost $1.50 to make a tablecloth at his factory in Dongguan, which is sold at a retail price of $3 in the US. "Shifting the production lines means adding up costs for logistics, and cheap made-in-China products may not always be available," he said.