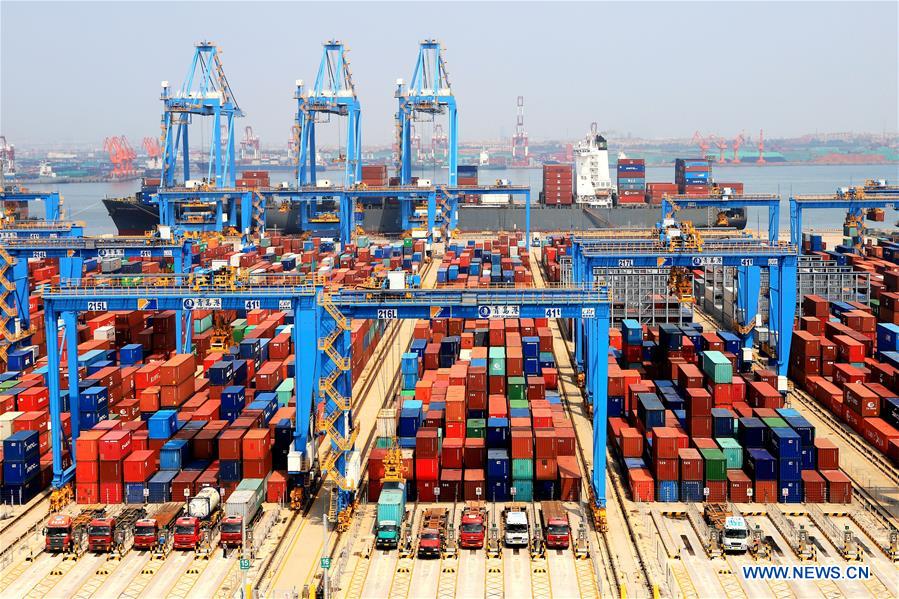 With China's export machine roaring into full swing, and helping mend the coronavirus-fractured global supply chains despite intermittent threats and hostile moves notably by the US and Australia, the country's exports have proven to be a tower of strength with a full-year gain of 3.6 percent in dollar terms over 2020.

The annual growth in exports, far better than initially expected, builds on a solid base for economic growth to be firmly in positive territory over the past year, economists said.

They anticipate the export machine to be exceptionally busy in the first quarter of 2021 as the coming Spring Festival - a traditionally week-long or more national holiday that usually causes a labor shortage - will be different this year due to recent sporadic coronavirus outbreaks prompting many places in China to encourage people not to travel back to hometown and remain at work.

China became the only economy in the world to achieve positive commodity trade growth in 2020, General Administration of Customs Spokesman Li Kuiwen told a press conference on Thursday.

The results are arguably uplifting for a year disturbed by the pandemic. They also point to renewed momentum in the trade sector.

"The growth in trade was due to the effective prevention and control of the epidemic in China. When the global manufacturing industry stalled, China's manufacturing industry stood out, which enabled global orders to return to China after the third quarter, and enabled China's foreign trade to still achieve good results last year," Hu Qimu, a senior researcher at the China Digital Economy Institute, told the Global Times.

Tian Yun, vice director of the Beijing Economic Operation Association, who has visited exporters in East China's Zhejiang Province in December, said local mask manufacturers have been flooded with orders from overseas markets since the third quarter.

The robust orders personify a strong rebound in exports over the last two quarters of 2020, effectively fixing the big dent left by the first quarter when the economy contracted 6.8 percent, Tian told the Global Times.

The final results were far better than initially expected in May, Tian noted. In May, the country's exports were estimated to remain flat in a best-case scenario while imports might record a double-digit decline.

In a research report sent to the Global Times on Wednesday, Wang Tao, chief China economist at UBS, said China's exports were stronger than expected in 2020, owing to rising demand for protective gear and stay-at-home products.

"This was the case even in the US market where Chinese products face higher tariffs," Wang said, expecting a strong global recovery to help China's exports surge an estimated 10 percent in dollar terms this year.

The manufacturers, temporarily vexed by power shortages at the year-end as Zhejiang opted to curb power consumption to meet carbon emissions targets, would continue to see robust orders, Tian said.

Calling for smaller exporters to consider the use of currency hedging amid yuan's strength, the economist reckoned that a potential hiatus in the country's travel rush tradition this year due to heightened coronavirus control measures would augur well for exporters working around the clock to deliver goods to their buyers.

Many regions in the country including Zhejiang and South China's Guangdong Province - the twin trading powers - have rolled out measures including Spring Festival subsidies and overtime pay, to encourage people to avoid traveling to their hometowns for the holidays.