Film executives and creators were optimistic about the industry's future as they gathered at a forum to celebrate the 10th anniversary of the Beijing International Film Festival (BJIFF). 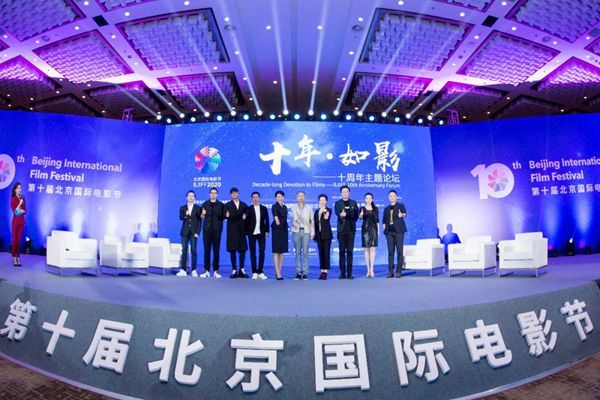 Guests pose for a group photo at "The Decade-long Devotion to Films — BJIFF 10th Anniversary Forum," which was held in Beijing during the 10th Beijing International Film Festival, Aug. 23, 2020. (Photo: BJIFF)

"The Decade-long Devotion to Films — BJIFF 10th Anniversary Forum" was held on Aug. 23 and featured guests sharing their thoughts on the impact of the COVID-19 pandemic, along with other key topics, such as how the BJIFF will adjust its position for future growth, how science and technology will empower the BJIFF's growth, how to align a foundation and value orientation of awards with market trends, how to optimize the direction for cooperation — as well as the significance and prospect of the online BJIFF — and how to create infinite possibilities for the BJIFF.

As an important platform for international cultural exchanges, the barometer of the film market, an incubator of new filmmakers and projects and a remarkable identity of urban culture, the BJIFF has become the most globally influential film culture exchange event in China. It has also gained widespread attention and popularity among domestic and international film institutions, filmmakers, film fans and the public, Wang noted.

"We are gathering here at the 10th BJIFF to summarize our past, reach consensus, and join hands to explore opportunities amid the crisis and start anew under difficult circumstances. Let's help the BJIFF embark on a new journey for the next decade and contribute to China's transformation from a large film country into a film power," she said.

For ten years, the BJIFF has served as a bridge helping Chinese filmmakers, especially young directors, fulfill their career dreams and strengthen their resolve in navigating the film industry.

Larry Yang won the Award for Projects with Greatest Commercial Potential at the fourth BJIFF Project Pitches for his work "Mountain Cry." The director who rose from BJIFF's preliminary Project Pitches event has now become a renowned director. In his view, for most of the year, every filmmaker is struggling on their own. "The eventual holding of the BJIFF is like a replenishment, which not only convinces filmmakers that the Chinese film industry remains vigorous but also imbues them with the firm faith that they should hang in there and that the Chinese film industry will surely regain its previous glory," he said.

Breakthroughs generate growth momentum and vitality for the BJIFF. Xu Tao, member of the leading Party members' group and deputy chief editor of Beijing Television, said the 10th BJIFF is quite remarkable. "It is extraordinary not only because it is the 10th anniversary but also because many people were unable to go to movie theaters for a long time during the COVID-19 outbreak. However, during that tough period, films never left us. Just like the weathering of storms, life continues."

She added, "The hosting of the BJIFF under such circumstances signifies that the curtain will never come down on films — or on dreams."

The BJIFF remains young, but at its tenth anniversary, the BJIFF has been hugely impacted by the COVID-19 outbreak. However, Chinese films have withstood the ordeal, and China has managed to contain and mitigate the pandemic.

Wang Zhonglei, CEO and vice-chairman of Huayi Brothers Media, was excited to say that the world's weekend box office record in 2020 was set by a Chinese film, "The Eight Hundred," which he produced. The film grossed a staggering 810 million yuan ($117 million) during the opening weekend, making it the world's biggest film to debut in 2020.

"Movie theaters in China were finally reopened on July 20. We were so excited about that moment," he said. "And I have proposed to the film administration that we would love to offer our excellent movies for screening after movie theaters are reopened."

Wang also said he thought that Chinese filmmakers have been resilient and they are getting back on track. "I think the Chinese film community is mobilized," he said. "There are already four or five blockbusters that announced their date of release around the National Day holiday, which proves our market will continue to recover and grow quickly."

Director Chen Sicheng also indicated that, when it comes to the pandemic, filmmakers should think about the big picture, such as how the pandemic has changed humanity. "We waited for opportunities. Compared to other countries, China's superiority stood out in the pandemic. We are doing the best in terms of prevention and control. And our film market is recovering gradually."

Chen's much-anticipated "Detective Chinatown 3" is still finding a proper release date after a Spring Festival delay. He revealed he is working on two films: "My People, My Homeland" and "Mozart from Outerspace."

During the COVID-19 outbreak, Lu Chuan was creating his new work, "Bureau 749." He said, "I witnessed so many lives and deaths in Wuhan from afar during the outbreak, which influenced my creation of movies in many ways. Movie production is also about growth. Everyone seems so small when facing the times. What you feel and think should be integrated into your creation. We tried really hard to draw lessons from the pandemic and infuse them into my film."

The BJIFF has been committed to trying new technologies over the past decade, such as the vigorously built Virtual Reality Section and this year's online screenings. At present, the development of the internet is disrupting all regular paces and boundaries. It is shortening the window between cinemas and the availability of online streaming, and it is bringing new challenges for the future development of the BJIFF.

Wang Zhoglei said the role and influence of the BJIFF would be somewhat exempt from the changes brought on by theatrical and streaming services. On the contrary, the internet will help promote the festival and enhance its influence. However, he acknowledged that a shorter window would influence theater screenings, transform moviegoers' habits and exert a huge impact on cinema markets.

Lu Chuan said he was not against online streaming and that he was even trying out internet film projects, whereas Chen Sicheng did not think the streaming media and movie theaters would ever fully fuse. "There will be so different works that the audience must go to movie theaters to enjoy unique cinematography," he said.

Director Wen Muye agreed, adding, "The audience must sit in a big theater to feel the energy that can touch their soul."