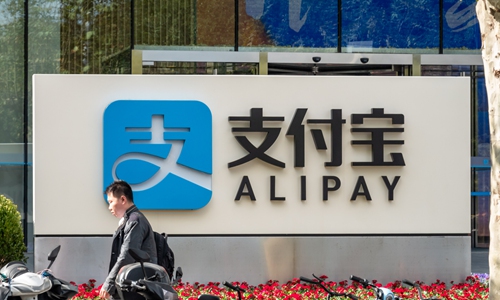 A passenger walks by an Alipay building in the Lujiazui financial center in Shanghai on Wednesday. Alipay. (Photo: IC)

Chinese financial services providers are flocking to Singapore to offer banking services for both retail and wholesale customers, as one of Asia's major financial hubs opens up the sector.

Singapore's move to attract more online financial services platforms poses serious competition to another financial hub in Asia - the Hong Kong Special Administrative Region (HKSAR) - which has been engulfed in months of political unrest that dented its image, a financial analyst said.

Alibaba Group affiliate Ant Financial confirmed to the Global Times that it bids for a license as well.

Singapore's status as a regional financial hub that covers the Southeast Asia market as well as its advanced financial system may have attracted the Chinese firms, said Liu Dingding, a Beijing-based internet industry analyst.

Singapore's move to attract Chinese online financial services providers comes as the HKSAR - another major financial hub in Asia - has faced months of political unrest that dented its global image. The HKSAR has also been attracting fintech firms to set up businesses in the city.

In February 2018, Hong Kong allowed technology companies to set up digital banks with more than 50 applicants competing for a license. So far, eight licenses have been issued by the Hong Kong Monetary Authority.

"Politically, Singapore can be a bridge between the West and the East. However, Hong Kong has suffered from months of unrest and it takes time to deal with the negative impressions built up by global capital," Dong Dengxin, director of the Finance and Securities Institute at Wuhan University of Science and Technology, told the Global Times on Tuesday.

Dong noted that the Chinese fintech companies will bring to Singapore business related to digital banking, as well as the whole internet-based industrial cluster, including e-payments and settlements in transnational online shopping.