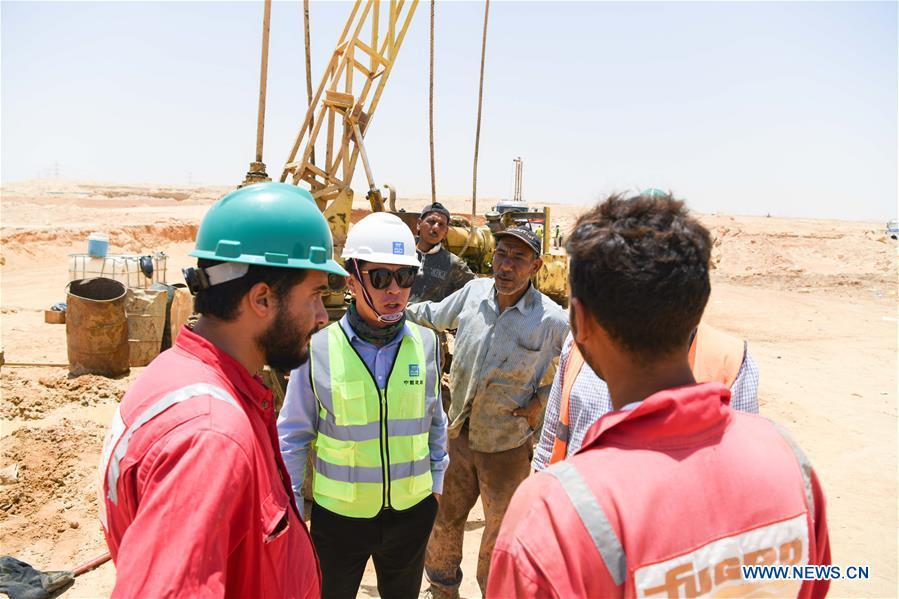 Field technicians of China State Construction Engineering Corporation (CSCEC) and their Egyptian colleagues work at the construction site of the "Iconic Tower" in Egypt's New Administrative Capital, about 50 kilometers east of Cairo, on July 3, 2018. Some 50 km east of the capital Cairo, the construction of the Central Business District (CBD) undertaken by CSCEC in Egypt's new administrative capital is carrying on under the scorching sun. (Photo: Xinhua)

CAIRO -- China State Construction Engineering Corporation (CSCEC) contributes to enhancing the modernization process of Egypt via its ongoing construction of a 20-tower business district in the country's new administrative capital city, some 50 km east of Cairo, said the chief of CSCEC branch in Egypt.

"The under-construction new administrative capital is considered a milestone in Egypt's development and modernization, and the Central Business District (CBD) being built by CSCEC is one of the most important projects of the new capital," Chang Weicai, general manager of CSCEC Egypt, told Xinhua on Saturday.

Chang's remarks came after his reception of Egyptian Prime Minister Mostafa Madbouly and Chinese Ambassador to Egypt Liao Liqiang at the construction site, where he accompanied them in a tour at the Iconic Tower, one of the CBD's 20 towers all of which are currently under construction.

"Since the beginning of the CBD construction, the Egyptian prime minister has visited the site about seven times, which shows how important the project is to the Egyptian government," Chang said.

"The Egyptian prime minister also witnessed the mass concrete pouring of the Iconic Tower base in late February 2019. He attentively follows up the progress of the Iconic Tower erection and he has full confidence in our company's completion of the project successfully," Chang told Xinhua.

The deal for the CBD project was signed in January 2016 in the presence of the Egyptian and Chinese leaders and CSCEC officially started the project in May 2018.

"In the second half of 2021, we will start delivering the 20 buildings one by one. By 2022, we will deliver the whole project with a completed construction area of about 1,900,000 square meters," said the general manager.

The would-be 385-meter high 80-floor Iconic Tower is expected to be the tallest skyscraper in Egypt and Africa upon completion.

"In the Iconic Tower, we have finished constructing 16 floors with a 100-merter height. The construction speed rate at the tower has reached 5.5 or six days per floor. The tower is expected to be 385 meters high by the end of 2020," Chang pointed out.

He explained that the CBD project is jointly carried out by Egyptian and Chinese hands.

"We have about 800 Egyptian engineers, 4,000 Egyptian workers, 800 Chinese engineers and 1,000 Chinese workers who are currently working in the project," said the Chinese manager, noting that CSCEC has cooperated with about 100 Egyptian local companies so far.

Chang stressed that Egypt is among the most important countries located on the routes of the China's Belt and Road Initiative (BRI) that seeks common development via win-win partnerships, hailing Egypt's vital strategic location as well as its political stability.

He noted that CSCEC entered the Egyptian market 35 years ago and it would like to make use of the golden chance for Egypt's economic development to take part in residential and also economic constructions in Egypt.

"Egypt now has a golden chance for economic development, and the CBD joint project embodies both China's BRI and Egypt's Vision 2030 for future development," added the general manager.