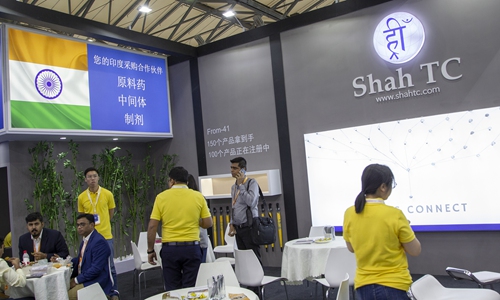 Active pharmaceutical ingredient (API) manufacturers in China are going full speed ahead to produce what US President Donald Trump has called a "game-changer" as well as other APIs to help countries around the world combat the COVID-19 pandemic, as India moves to partially resume exports of two crucial drugs.

India said on Tuesday it has decided to allow limited exports of the anti-malaria drug hydroxychloroquine as well as paracetamol, which can be used to reduce fever, depending on humanitarian concerns and the extent of COVID-19 infections in the country, the Times of India reported.

The decision came as the South Asian country got fresh imports of 150 million tons of APIs from China recently, the report said.

With the COVID-19 pandemic raging across the world, anti-malaria drugs have been increasingly sought after and many potential buyers turned to China after India imposed an export ban in March.

Several API manufacturers told the Global Times on Tuesday that they have received more overseas orders since the outbreak.

"Since the end of 2019, the volume of overseas orders for our paracetamol APIs has increased by more than 30 percent," an employee surnamed Zheng with Anqiu Lu'an Pharmaceutical Co, located in Anqiu, East China's Shandong Province, told the Global Times on Tuesday.

With a production capacity of 40,000 tons a year, the company is the world's biggest manufacturer in the field, exporting to 100 countries and regions including the US and the EU, Zheng said.

"We are working in shifts to keep our machines running 24 hours," he said.

However, surging orders have led to tight supplies of raw materials. Zheng said that upstream raw material price rises and higher logistics costs have driven up export prices by about 10 percent.

A salesperson surnamed Yang with Chongqing Southwest No.2 Pharmaceutical Factory Co said that there have been so many export orders for chloroquine phosphate that it has started research and development into pharmaceutical intermediates in-house in a bid to expand production capacity.

Large international clients have generally bought chloroquine phosphate from India because of the low output in China, which reflected low pre-pandemic demand.

However, India's insufficient supply means that China will fill the gap, according to industry insiders.

Yang said that the company has exported about 2 tons of chloroquine phosphate to Africa, Southeast Asia and South America since the COVID-19 outbreak began.

"Given enough raw materials, we can produce 20 tons of chloroquine phosphate a month for export shipments," he said.

Xin Guobin, vice minister of industry and information technology, said at a press briefing on March 30 that more than 80 percent of China's API manufacturers had resumed production, which effectively eased global API shortages and maintained the safety of the global drug supply chain.

Yu Mingde, former director of the medicine department of China's State Economic and Trade Commission, called for other countries to grant more certifications to China's API manufacturers as China's capability in the fine chemical sector and chemical raw material production outpaces that of India and other countries as well.

In 2019, China exported about 10.12 million tons of APIs, up 8.83 percent year-on-year, according to data from the China Chamber of Commerce for Import & Export of Medicines & Health Products. According to the chamber, China exported APIs to 189 countries and regions, mainly in Asia, Europe and North America.