BUSINESS Chinese firms ask about agricultural prices from US: MOFCOM

Chinese firms ask about agricultural prices from US: MOFCOM 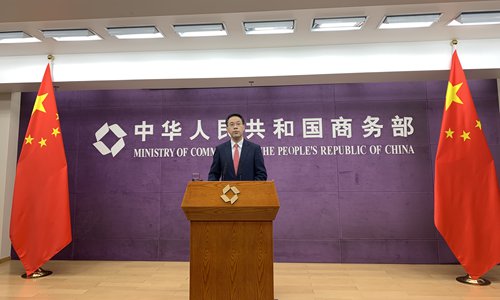 China welcomed the goodwill from the US side, and Chinese companies have started to inquire about prices of agricultural products, including soybeans and pork, from the US, Gao Feng, spokesperson of the Ministry of Commerce (MOFCOM), said on Thursday.

Gao's comments came after US President Donald Trump said in a tweet on Thursday that they have agreed, as a gesture of goodwill, to move the increased tariffs on $250 billion in goods (25 percent to 30 percent) from October 1 to 15.

Gao said the trade teams from both countries continue to communicate, and they are making preparations for the coming talks.

China's Commerce Ministry said last week that Beijing and Washington will strive to achieve "substantial progress" in the upcoming 13th round of trade consultations in early October in Washington.

"We hope the two sides would move in the same direction, take practical actions and provide a sound environment for the trade talks, and it would be good for the two countries, and for the world," Gao said at the press con-ference.

Beijing on Wednesday announced a plan for certain US imports and companies to file for exemptions from Chinese tariffs.

The US products exempted from Chinese tariffs include 16 types related to livelihood, such as lubricating oil, medical linear accelerators and anticancer drugs.

"The Tariff Commission of the State Council will continue to work on the exemption list and publish it "at a proper time," Gao said.

Experts said the US decision to postpone extra tariffs is good for the upcoming China-US trade talks, but what Trump has done is far from enough, and China should not consider it a breakthrough in trade talks which remain very tough.

"Delaying the extra tariffs is far from enough, and we cannot praise him. Only by removing the extra tariffs can he show his sincerity in trade talks," Bai Ming, a research fellow at the Chinese Academy of International Trade and Economic Cooperation, told the Global Times.

"More importantly, we should watch what he has done and what he will do," Bai said.