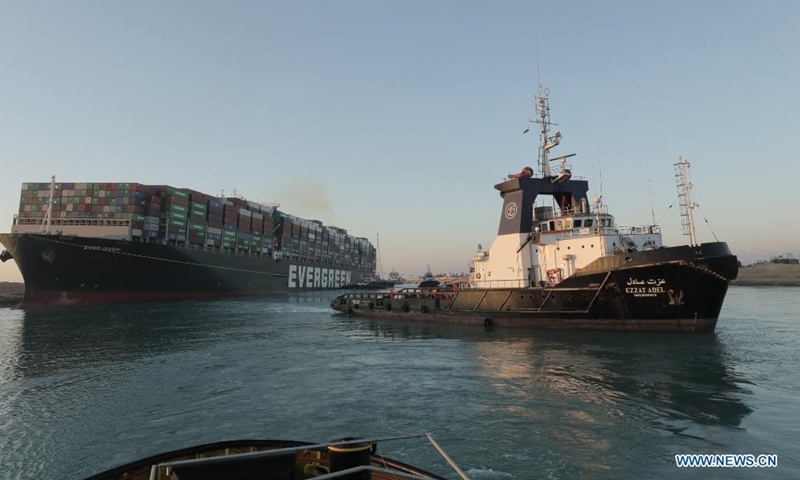 As the world pays attention to the progress of the massive container ship that ran aground in the Suez Canal, one of the world’s busiest transport arteries, Chinese netizens and industrial equipment producers have been actively promoting made-in-China excavators and Chinese infrastructure capabilities that could improve the canal’s development.

A netizen named Jiugongge said that if one of the two enterprises were involved in solving the blockage, it would not have taken six days to refloat the ship.

The huge container ship, Ever Given, got stuck in the Suez Canal last Tuesday. It has now been freed from the shoreline, the Suez Canal Authority said on Monday, according to media reports, but it remains unclear when normal shipping will resume.

Within five hours’ time, the container ship will be completely floated, and operations in Suez Canal are expected to resume by the end of Monday, Moneycontrol reported, citing a senior official at Wilhelmsen Ships Service, which manages transit operations in the canal.

Sany responded by saying that since many people have high expectations for its excavators, it will give away five mini excavator models for free in a lottery draw.

XCMG also posted an ad on its Weibo account and an ordering hotline for its excavators.

Chinese people have a lot of confidence in the country’s infrastructure capabilities and the advantages of made-in-China products, industry observers said.

Even in the coronavirus-plagued 2020, Chinese-made excavators saw a rise in exports year-on-year to 35,000 units, an increase of 30.5 percent, far exceeding the overall performance of the global industry.

An industry insider, who asked to remain anonymous, told the Global Times that relevant technologies are not that advanced in Egypt, even though the country has been operating the canal for decades. He suggested that Egypt and China could cooperate in the canal’s further development, with the latter offering experience and the latest technology.

A total of more than 450 ships have reportedly been kept waiting in line to pass through the Suez Canal due to the blockage.

Chinese ships account for one tenth of the annual traffic volume of the Suez Canal each year. According to data from the Suez Canal Authority, nearly 19,000 ships passed through the canal in 2020, an average of 51.5 ships per day.