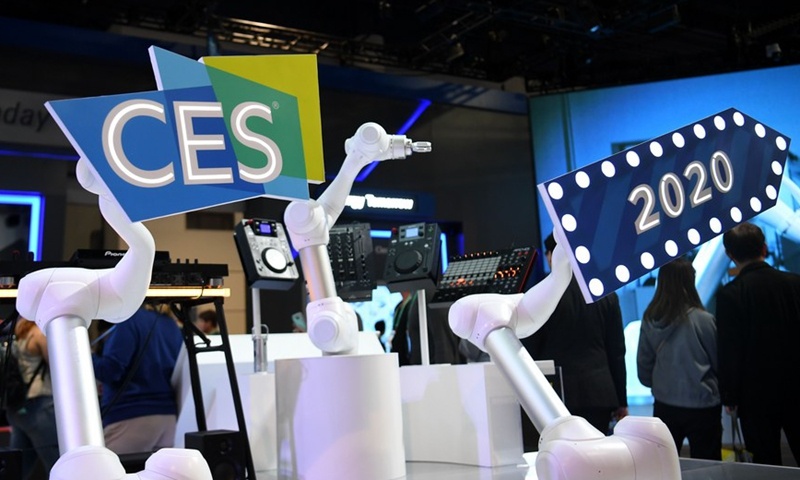 The annual Consumer Electronics Show (CES) in the US, which is being held online for the first time this year due to the ravaging COVID-19 pandemic, has seen Chinese high-tech companies scale down their presence by more than 80 percent compared with 2020.

The all-digital event, which has replaced face-to-face talks amid the health crisis, has weakened the enthusiasm of potential attendees. For Chinese companies, uncertainties caused by bilateral tensions and the US' groundless crackdown on Chinese high-technology companies are also factors, industry observers told the Global Times.

The CES 2021 runs from Monday to Thursday. The exhibition is divided into four key sectors: 5G, smart city, digital medical and smart transportation.

This year's event will feature more than 1,900 exhibitors, with 210 companies based in China, according to Gary Shapiro, president and CEO of the Consumer Technology Association, organizer of the CES, the Xinhua News Agency reported.

Last year, there were 4,500 companies, nearly one-quarter from China. A total of 1,551 Chinese firms reportedly took part in 2018, a record high.

Horizon Robotics, a domestic artificial intelligence vision chip provider that participated in last year's CES, told the Global Times that it has no new product to be released at this year's show, but it hopes to introduce itself to customers.

A fresh high-end electric sedan, jointly developed by Alibaba, Chinese carmaker SAIC and Shanghai Zhangjiang Hi-Tech Park Development, was simultaneously launched in Shanghai, London and the CES 2021. It comes under the name IM, which stands for "intelligence in motion."

The CES, now in its 54th year, has been the global stage for innovation. It was once hailed as a Chinese technology show, due to the large number of Chinese participants. But stung by the current US administration's restrictions on Chinese access to US technologies, which intensified last year, domestic companies have lost enthusiasm, said Wang Chao, founder of the Wenyuan Institute for Politics and Economics, a Beijing-based think tank.

"But they should not stop making forays into the US market, the world's largest in terms of consumer electronic goods, with higher profits," Wang told the Global Times, adding that the incoming new US administration might have some policy changes on tech competition and cooperation.

Meanwhile, it is notable that emerging shows in Asia have shown a tendency to outshine the time-honored ones as CES Las Vegas and MWC Barcelona, Wang said.

A representative of a Japanese technology company, who asked to remain anonymous, told the Global Times that the significance of attending of China International Import Expo has overtaken that of CES for the company, according to last year's experience.

"Shanghai has been hosting a raft of world-class expos in recent years, and it is expected to stand out more in the future based on that fact that more global firms would like to put their supply chains and market focus in China," Wang said.