BUSINESS Chinese firms shift to Switzerland for capital amid US crackdown

Chinese firms shift to Switzerland for capital amid US crackdown 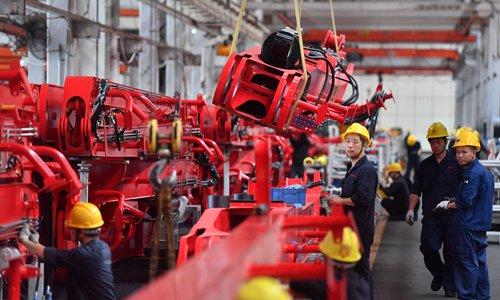 As the US constantly pushes for a so-called financial decouple from China, Chinese firms have been shifting to new overseas markets such as Switzerland to expand capital-funding channels.

Experts said the fast growth of these capital markets will soon make the US realize that it is not irreplaceable, while urging the US to correct its mistakes and build a fair and predictable business environment for Chinese firms.

Generally, these companies hope to expand international capital-raising channels through issuing GDSs overseas to meet the needs of their international business while strengthening global brand recognition, according to their statements.

GDRs are tradable certificates that are issued to represent underlying shares in a foreign company and traded on a local stock exchange.

By listing in Switzerland, Will Semiconductor aims to increase its international recognition, strengthen strategic cooperation with global clients and suppliers and increase international research and development capacity, the company said in a statement on Wednesday.

"As a global leading financial hub, Switzerland's financial environment and capital market rules are relatively mature, with a higher degree of opening-up and fairness. This makes it attractive for foreign firms," Dong Dengxin, director of the Finance and Securities Institute of the Wuhan University of Science and Technology, told the Global Times.

Compared with launching IPOs in overseas markets, the cost of GDR issuance is lower because the process is mature, and that the issuer is already listed on the A-share market makes it easier for their GDRs to be approved in overseas markets, Dong said.
He added that allowing listed companies in the A-share market to issue GDRs overseas is a crucial part of China's capital market reform, which will further open up domestic markets, while helping build a sound reputation for domestic firms in global capital markets.

The recent flurry of GDR issuances came as the China Securities Regulatory Commission revised provisions of the Stock Connect program between domestic and overseas stock exchanges in February this year to expand its scope to include the Shenzhen Stock Exchange, along with stock exchanges in Switzerland and Germany.

Previously, only companies listed on the Shanghai and London stock exchanges could participate in the Stock Connect.

"Backed up by China's stable economic growth, high-quality A-share companies are attractive to global investors. While the US keeps threatening to delist batches of Chinese firms, capital markets in countries including Switzerland, Germany, the UK and France will gradually grab the cake," Cao Heping, an economist from Peking University, told the Global Times on Thursday.

The US will soon find out that it is not irreplaceable, he said, noting that Washington should correct its mistakes to build a sound business environment for the listing of foreign firms, including those from China to allow Americans to share China's development dividends.