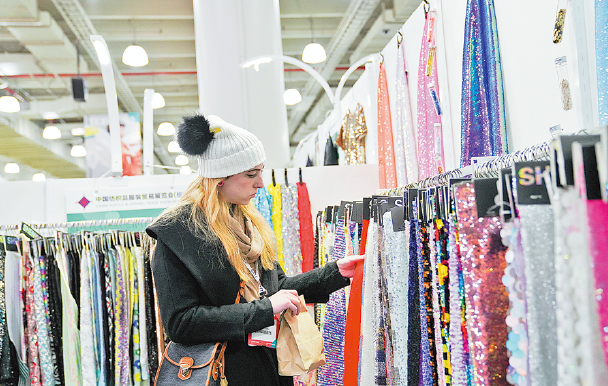 A visitor looks at China-made fabrics on show at a textile expo in New York in January. (Photo: Xinhua)

Chinese companies expanded their presence in emerging markets during the first two months of this year, despite the novel coronavirus outbreak weighing on exports, a Commerce Ministry official said on Thursday.

The ability of Chinese companies to explore emerging markets has continued to improve, with their exports to emerging economies rising by 3.7 percentage points to 51.8 percent of China's total exports during this period, said Li Xingqian, director-general of the department of foreign trade under the Ministry of Commerce.

China will expand goods imports, including important raw materials, and give full play to the advantages of the new format of foreign trade, extensively collect overseas market information and expand supply sources, as well as use overseas warehousing and international transportation resources operated by cross-border e-commerce platforms to improve procurement and distribution efficiency, Li said.

He said China's shipments of high value added-goods such as integrated circuits and automobiles have grown considerably, up by 10.5 percent and 0.3 percent during the period.

While supporting the production resumption of export-oriented firms, the government has focused on key manufacturing segments and paid close attention to key players in the industrial chain and leading companies, as well as key links in the field of foreign trade, he said.

The nation will look to shorten the negative list for foreign investment and encourage financial institutions to increase foreign trade loans to cope with the impact of the novel coronavirus outbreak and maintain steady progress in foreign trade and investment, according to a policy decision made at a State Council executive meeting chaired by Premier Li Keqiang on Tuesday.

Efforts must also be intensified to expand the number of industries in which foreign investment is encouraged so that foreign investors in more sectors can benefit from tax and other incentives, said a statement issued after the meeting.

Participants at the meeting called for sound preparations to be made for the China Import and Export Fair (Canton Fair) this spring to bolster foreign trade cooperation.

The preparations for the 127th China Import and Export Fair are proceeding as planned. The fair is scheduled to start on April 15 in Guangzhou, Guangdong province, according to the event's official website.

With the World Health Organization declaring the novel coronavirus outbreak is a pandemic, Li, from the Ministry of Commerce, said concerted global efforts are needed as the global industrial chain has been affected by the epidemic.

"China will further reduce the negative list for foreign investment in its FTZs, and explore the establishment of a cross-border negative list management system for service trade in the FTZs this year," she said.

The Ministry of Commerce, China Export and Credit Insurance Corp and the China Chamber of International Commerce have also increased support for trade financing, the use of export credit insurance and the issue of force majeure certificates to help export-oriented firms cope with the impact of the virus.

China has issued 5,637 force majeure certificates as of Wednesday to protect companies from legal damage arising from the novel coronavirus epidemic, data released by the China Council for the Promotion of International Trade showed.

A total of 103 trade promotion agencies and industry chambers have issued these certificates to Chinese exporters across various sectors, covering a total contract value of 503.5 billion yuan ($72 billion).