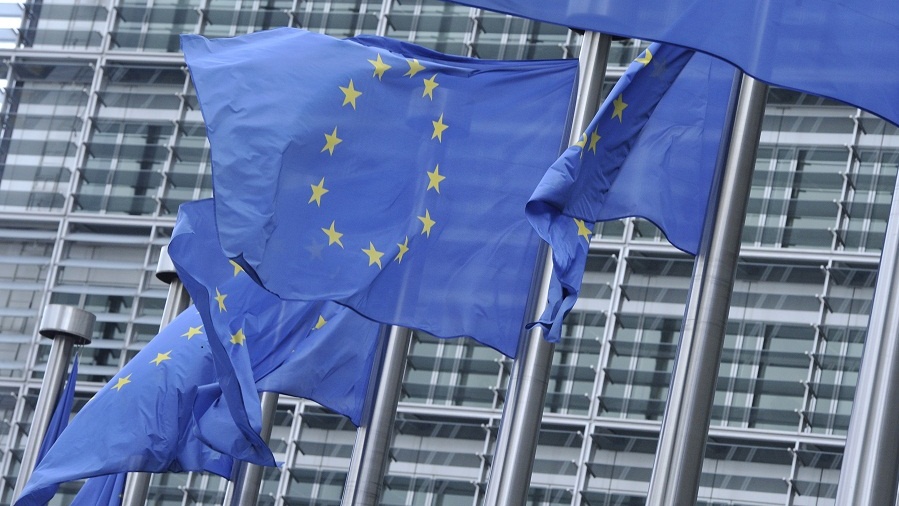 The European Union flags in front of EU headquarters in Brussels, Belgium. [Photo/Xinhua]

BRUSSELS -- Chinese companies in the European Union have a less favorable view than last year on the ease of doing business in the bloc, but they are willing to increase investment when the situation gets better, a survey published on Thursday shows.

The survey, conducted by China Chamber of Commerce to the EU (CCCEU) and Roland Berger, a global strategy consultancy, is part of CCCEU's annual recommendation report titled "Acting for Common Future: Chinese Enterprises in the EU Striving for Growth amid Slowdown and Regulatory Hurdles."

The survey finds that Chinese companies in the EU gave a score of 70 points to the general business environment, slightly lower than 73 points in 2019.

When asked to assess the overall business environment, close to 60 percent of the interviewees cited "a slight decline," and 10 percent "a significant decline."

The survey also finds that if the ease of doing business in the EU improves, 60 percent consider investing more and close to 20 percent intend to increase "significantly."

According to the survey, Chinese businesses have somewhat less favorable views in three aspects concerning the ease of doing business: political environment, macroeconomic and sector-specific environment, and labor market.

On the contrary, they have more favorable views than last year on the EU's infrastructure and research and development (R&D) sector: 56 percent see greater connectivity between China and the EU, and 53 percent point out more frequent scientific exchanges and joint research.

Based in Brussels, CCCEU was founded in 2018 by a group of Chinese enterprises. It represents up to 70 members and chambers in member states, covering about 1,000 Chinese companies in the EU.