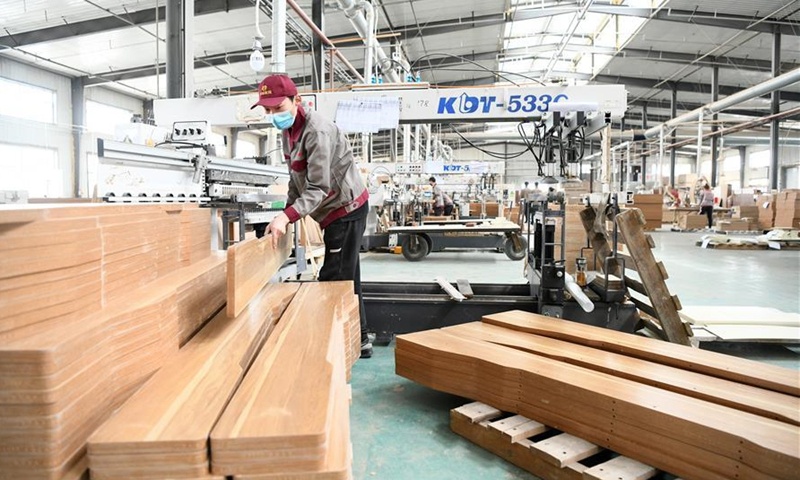 Workers work at a factory of a furniture company in Ning'an City, northeast China's Heilongjiang Province, May 21, 2020. Up to now, all the enterprises above designated size in the city have resumed production. (Photo: Xinhua)

Emerging from the COVID-19 disruptions, the Chinese furniture industry is picking up momentum as more export orders arrive, helping the sector become one of the fastest industries to recover from the epidemic-related slowdown in the first half of the year.

In Shunde, a district of Foshan city in South China's Guangdong Province, focusing on furniture manufacturing, scenes of receiving foreign clients' phone calls, making furniture and loading it on trucks for export are common, local industry players told the Global Times on Thursday.

A manager surnamed Ye at Korra Bath Ware Co, a sanitary products maker that focuses on exports, said new orders, mainly from the US and Europe, increased by 30-40 percent in the third quarter compared with the second quarter when China's foreign trade was crippled by the pandemic.

Frank Cheng, head of the foreign trade department of Dingzhi Furniture Co in Dongguan, Guangdong, told the Global Times on Thursday that the company's foreign orders recovered starting in June. The number in September was 60 percent higher than in August.

"The new orders in September mainly came from US, Europe and Southeast Asia. The products they want are mostly beds and sofas."

"Following the order boom, our factory increased its workforce by 30 percent in September, but it's still not enough. Now we are talking about orders for January and February next year," Cheng said.

On Alibaba-backed AliExpress, a leading business-to-consumer cross-border e-commerce platform in China, furniture orders are up 191 percent year-on-year this year, and the number of payment orders is up 112 percent.

The most popular exported products are sofas, beds, office desks and chairs, dining tables and chairs, as well as children's beds.

Europe, which was on the brink of taming the pandemic, is now engulfed by a second wave. Thus, more people choose to work from home, triggering demand for office furniture like chairs.

"New international orders didn't come until the end of March, when overseas stock ran out," Li said. "Now the orders are surging on all e-commerce platforms, such as eBay, Amazon and Alibaba."

However, Li said companies in Anji don't think the boom will last beyond May or June next year, since uncertainties persist.

The domestic furniture industry emerged from the COVID-19 epidemic with more orders in hand, and some orders were shifted from Southeast Asia due to the latter's scant supply caused by pandemic disruptions, according to Nie Xirui, secretary-general of Shunde Furniture Association.

However, in tandem with rebounding orders, price hikes for raw materials and maritime shipping costs have squeezed the profits of companies, Nie told the Global Times on Thursday.

"Moreover, some companies have found it difficult to hire workers in Guangdong as more people chose to stay in their hometowns to make a living instead of returning the province," Nie said.