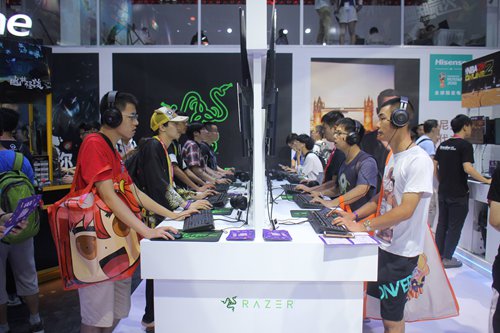 Chinese videogame companies, which have enjoyed double-digit growth in the domestic market, are increasingly looking to expand overseas, as the world's largest market for videogames starts to show signs of weakness.

China's videogame market grew 5.2 percent in the first half of 2018, according to a recent report by gaming industry research firm CNG and the China Audio-video and Digital Publishing Association, which showed that the sector is consolidating after years of double-digit growth.

The figure was a marked slowdown after years of more than 20 percent gains. With the slower growth, domestic companies are increasingly focused on overseas markets and such efforts are shown initial results, experts noted.

In the first half of 2018, sales of Chinese games abroad reached $4.63 billion, up 16 percent, the CNG report showed.

"There are issues with game quality and innovation that Chinese companies must solve when expanding abroad. Companies that focus on developing good gaming experiences have many opportunities," said Gao.

Four Chinese companies were among the world's top 25 gaming players in 2017, with Shenzhen-based Tencent becoming the largest gaming company in the world by revenue, with $18.1 billion gross revenue.

The number of Chinese companies in the ranking however failed to reflect the size of China's gaming industry. Eight US companies entered the ranking, as well as ten gaming companies from Japan.

Experts noted that Chinese companies are only beginning to develop strategies to expand overseas, starting with developing countries on China's periphery.

"Chinese gaming companies are just as good as foreign companies, but they have tended to focus on the domestic smartphone market, leaving console games for foreign players," Li Yiyang, an industry analyst with iResearch, told the Global Times on Sunday.

"Chinese companies are doing well in Southeast Asia, which is closer geographically, and where -- as developing countries -- the users have similar tastes and consumption habits. Other companies are also aiming for higher-value markets such as Japan, the US and Europe, and smartphone game makers are making some inroads into Japan," said Li.

China was the world's largest market for video games in 2017, with a value of $37.9 billion and 615.9 million players, surpassing traditional leading markets such as the US and Japan, according to gaming industry research firm Newzoo.

The booming market in China has produced a large ecosystem of gaming companies, which have been among the best performers in the economy in recent years.

As of July 31, China counted 191 public video game firms, six more than the previous year, and 20 more companies are in the process of listing in the stock market, according to a report on the competitiveness of China's gaming companies released by CNG on Saturday.

Average gross profit margins were above 60 percent, the highest in the wider entertainment industry, according to the report.