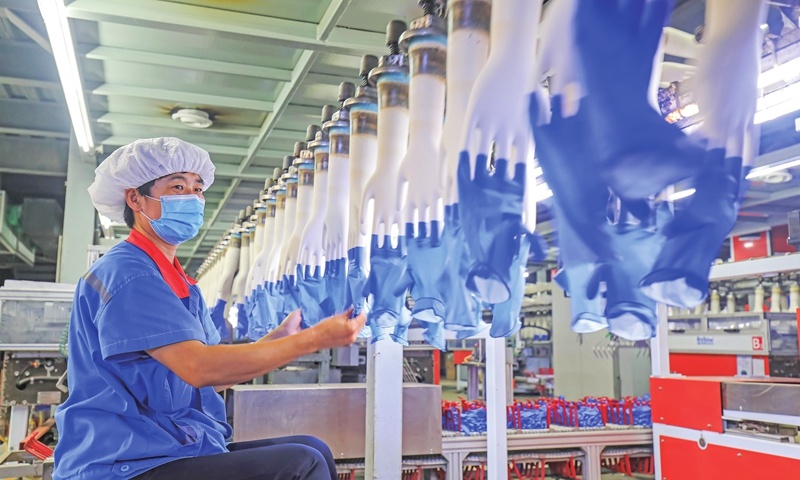 An employee works at a medical glove factory in Luannan county, North China's Hebei Province. The county, with an annual output of over 4 billion yuan ($619.13 million) worth of medical gloves, has in recent years aimed to build itself into a manufacturing base for this product. (Photo: cnsphoto)

Chinese glove makers are meeting rising demand from the US and Europe, with new order inquiries jumping by 10-20 percent in weeks, amid production disruption caused by a flare-up of epidemic in Malaysia, the world's largest rubber-glove supplier.

In the face of the new orders, major industry players have been working at their full swing to expand production capacity, the Global Times learned.

A person with Blue Sail Group, a leading glove maker based in East China's Shandong Province, told the Global Times on Thursday that it had received rising orders these days, after production was suspended at factories in Malaysia. More than 90 percent of the orders come from developed countries, including the US and some European countries.

The orders are in line with the company's expansion plan, with a new production line with capacity of 20 billion gloves annually to go into operation this month.

Another production line with a capacity of 10 billion gloves is under construction in Weifang, Shandong Province.

Another industry player, INTCO Medical, is part of the trend, with "conspicuous" growth in global orders from many of its clients starting in July, media reports said.

Malaysia recently imposed stricter restrictions on movement, businesses and factories in its capital Kuala Lumpur, as well as neighboring Selangor state, until Friday to fight a spike in new COVID-19 infections, Reuters reported on July 8.

"Malaysian glove manufacturers contribute up to 67 percent of the global supply or 320 billion pieces a year out of 480 billion pieces," The Malaysian Reserve, a business news provider, said in a report earlier in July.

Chinese glove production capacity used to be inadequate, but there have emerged more rubber glove plants since the epidemic outbreak, industry insiders said.

There are 5,384 disposable glove-related companies in China at the moment, after 2,779 companies registered last year and 235 others registered from January to Thursday, data from market information online platform Qichacha showed.

In addition to the newcomers, like the mask industry, some companies produced and stockpiled gloves during the outbreak and they are still in the process of releasing the stockpiles, meaning capacity is sufficient for now, Chen Hongyan, secretary-general of the Medical Appliances Branch of the China Medical Pharmaceutical Material Association, told the Global Times on Thursday.

While the supply chain disruption in Malaysia is driving more orders to China, industry insiders said that the supply chain transformation is increasingly tilting toward China, with or without the outbreak.

The sources of natural rubber are mostly located in Southeast Asian countries including Malaysia, making China heavily reliant on imports for natural rubber, which saw a jump in prices lately.

In order to reduce reliance on natural rubber, Chinese companies have focused their development and production efforts on gloves made of nitrile.

This chemical compound is not only less likely to cause allergic reactions and more likely to offer better tensile properties and protection.

"The epidemic caused an increase of raw material prices, so we began to develop raw materials independently, and the production line and ingredients of nitrile gloves were independently developed. The yield is adequate," the person with Blue Sail Group said.