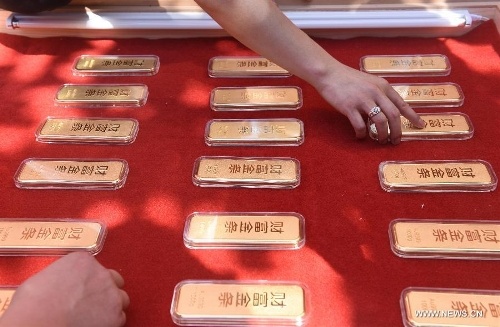 With cryptocurrencies in a near free fall, gold investors in China can breathe a sigh of relief as the price of the metal rises, and more Bitcoin investors are expected to shift to gold assets.

Bitcoin and other cryptocurrencies plunged after a series of tweets from Tesla CEO Elon Musk. Also, three Chinese financial industry associations on Tuesday warned of the risks of speculating on cryptocurrencies and banned financial institutions and payment platforms from handling transactions in these assets.

Sharp losses in Bitcoin accounts and the ban from industry associations dealt a serious blow to domestic investors, Chen Bo, director of the Digital Finance Research Center at the Central University of Finance and Economics, told the Global Times on Thursday.

As virtual currencies sank, international gold price rose to almost $1,900 per ounce on Thursday, the highest since January 11. JPMorgan analysts suggested in a Tuesday note that institutional investors are dumping Bitcoin for gold, industry news outlet cointelegraph.com reported on Wednesday.

On China's social media platform Sina Weibo, some users called on Bitcoin investors to shift to gold, which they said was more stable.

A 37-year-old Beijing gold investor surnamed Huang told the Global Times on Thursday that he invested in gold in January at a price of 380 yuan ($59.01) per gram, but his investment is just breaking even.

"I still expect a good gold price performance," he said, noting that investing in gold is convenient, while there is no formal way to invest in virtual currencies.

The gold market has had a rough time so far this year, but Chinese investors' enthusiasm for gold didn't decline. In stark contrast to the US and EU markets, purchases of gold exchange-traded funds (ETFs) and gold products in China both surged in the first quarter of 2021, according to the World Gold Council.

While global investors are selling their holdings in gold ETFs, money has been flowing into Chinese gold ETF products. As of the end of March, China's domestic gold ETFs had total assets of 72.4 tons under management, a record high, the council said.

Buyers in China were motivated by low prices, as well as expectations for higher inflation. Total demand for gold bars and coins in China reached 86 tons in the first quarter, the highest in 10 quarters and up 133 percent year-on-year, the council noted.