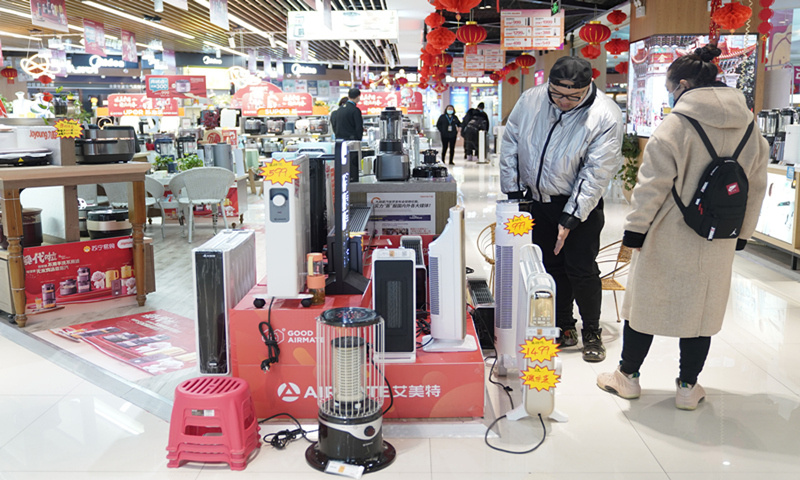 People buy heaters at a store of e-commerce platform Suning in Kunming, Southwest China's Yunnan Province on Monday. Recently, temperatures in Kunming have been falling, and heater sales have surged. Since the beginning of December, sales of small home appliances for the winter in Yunnan have more than tripled those of last year, with air conditioning sales up by 1.5 times, according to Suning. (Photo: cnsphoto)

Chinese home appliance exports surged by 18 percent in 2020 according to an industry report, partly because of production disruption overseas due to the ongoing pandemic.

The total annual export volume was 83.7 billion dollars, up 18 percent, the biggest rise in nearly 10 years, according to the report by the China Household Electrical Appliance Association.

By controlling the pandemic, China has created the conditions for business resumption so that domestic firms can respond to global demand, Hong Shibin, executive director of the marketing committee of the China Household Electrical Appliances Association, told the Global Times on Friday, noting that the continuous development of cross-border e-commerce also boosted exports.

Up to 50 percent of sales of home appliances such as air conditioners and electric water heaters are now via online channels, according to data from China-based research institute All View Cloud.

“The exports of small household appliances have performed well, such as small kitchen appliances and laptop computers. Items related to the household economy have seen huge global demand due to the epidemic,” said Shi.

China's home appliance industry began to rebound strongly from last June, according to the association.

Shi predicted that the trend will be sustained this year, but the growth will be more moderate.