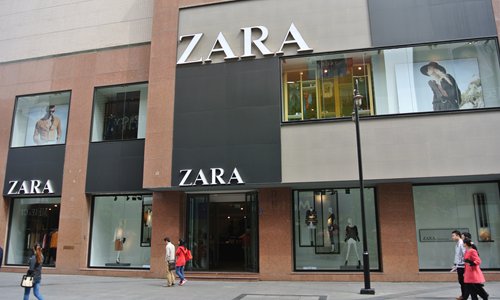 The Spanish fashion giant Zara reiterated its support for the "one country, two systems" principle after some Hong Kong rioters broke in and occupied a store, an attitude that was applauded by Chinese internet users and analysts.

The issue came about three months after the brand was mired in the subject of a boycott by Chinese people for suspected support of Hong Kong rioters by suspending business in September.

A group of unidentified people broke in a Zara store in the Harbor City, Hong Kong on Saturday afternoon. Store employees attempted to prevent them from entry several times but failed, read the statement.

According to a video on Twitter, some people wearing masks gathered in a Zara store and put a black mask on a plastic model and made two plastic models pose with arms out. Rioters also held black banners with slogans.

The company apologized in the statement to customers and staff members affected by the incident, saying that Zara firmly supports the "one country, two systems" principle and the territorial integrity and sovereignty of China.

Mei Xinyu, a research fellow at the Ministry of Commerce's Chinese Academy of International Trade and Economic Cooperation, said that Zara's statement was a wise attitude amid low economic growth and political unrest of the world.

China's huge and stable market is irreplaceable and significant to global entrepreneurs, Mei told the Global Times on Sunday.

Companies need to stand clear on fundamental principles and cooperate with the government to weather difficult times, he said.