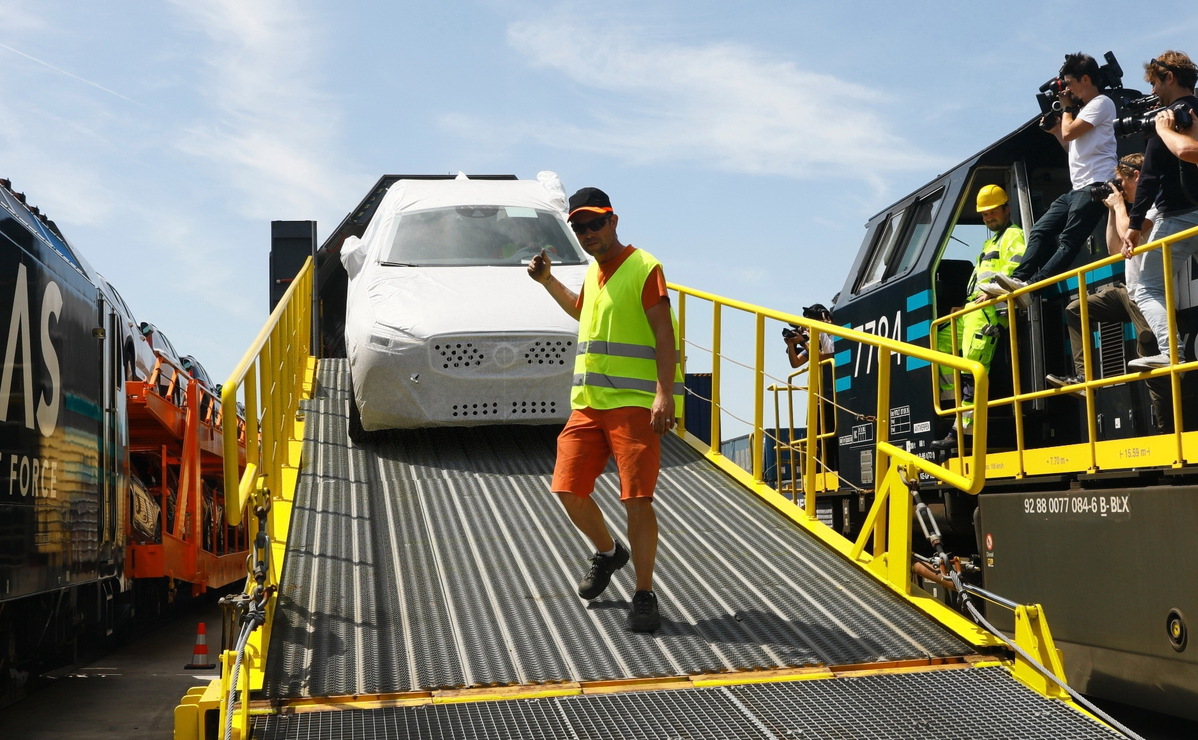 Volvo cars made in China are transported to Europe by freight trains. (File photo: Xinhua)

Chinese investment in Europe nose-dived in the first half of this year from the same period of last year due to growing trade tension and economic uncertainty, according to a report from international consultancy group EY.

Chinese companies invested $2.4 billion in Europe in the first half of 2019, a decline of 84 percent compared with the first six months of last year, the report said.

During the first six months, Chinese companies bought out or bought into 81 European businesses, down 28 percent. Since most transactions were relatively smaller ones, investment shrank by $15.3 billion compared with the same period last year.

Alicia Garcia Herrero, a senior fellow at Bruegel, a Brussels-based European think tank specializing in economics, said EY is "exaggerating the message" because Chinese FDI in Europe also started to decline in the second half of 2018.

"The actual deceleration that the report talks about is not really such when you compare the first half of 2019 with the second half of 2018," she told China Daily on Tuesday.

"Still, there has been a relevant deceleration which might be explained by less demand from Chinese companies. In that regard, we also have data showing that the share of SOEs' acquisitions is coming down although it remains more than 50 percent," she said.

Bruegel is expected to release a report on Chinese investment in Europe next week.

The EY survey revealed that there were no Chinese merger and acquisition deals in the first six months in Germany, Europe's biggest economy and normally the most popular EU country for Chinese companies looking to invest in.

Chinese companies invested a little more than $500 million into Germany, compared with the $10 billion they did in 2018. The United Kingdom overtook Germany to become the top M&A destination in Europe for Chinese businesses in the first six months of this year.

In July, Beijing Automotive Group Co Ltd announced it would take a 5 percent stake in German carmaker Daimler, a deal that is not included in EY's first six-month figures. The move came after Li Shufu, chairman of Zhejiang Geely Holding, bought a 9.69 percent stake in the German company in 2018.

Fast growing Chinese investment in Europe in previous years has made frequent headlines, with investment peaking at $85 billion in 2016.

Jochum Haakma, chairman of the EU-China Business Association in Brussels, cited the protectionist trend toward Chinese investment in some EU countries, restrictions by some EU governments on Huawei and ZTE, and China's control of capital outflow as major reasons for the Chinese FDI decline in Europe.

"The overriding underlying factor of the US-China trade conflicts reinforces these factors and is influencing the overall mood to invest," said Haakma, who is also chairman of the Netherlands China Business Council.

Yi Sun, head of China Business Services at EY, cited the economic situation in China and US-China trade tensions as the main reason for the reluctance of Chinese investors. She said that the overall Chinese M&A trend is still to buy companies that make strategic sense in terms of the skills or products they want.

In its report, EY said the Chinese investment has bottomed out and could bounce back once the China-US trade conflict is resolved.

"When the economy recovers and the trade conflict between the US and China is resolved, we will see a significant increase in transaction activity," Sun said in a statement, as quoted by Yahoo Finance.

In a June survey, EY found that political uncertainty in various forms is the most significant risk to Europe's attractiveness in the next three years.

Businesses being surveyed cited Brexit as the number one risk to Europe's attractiveness, followed by political instability in the European Union, and the rise of popular and protectionist feelings and global political uncertainty.

During the 21st China-EU leaders' meeting in Brussels in April, the two sides agreed to work toward a conclusion of a comprehensive bilateral investment agreement in 2020.