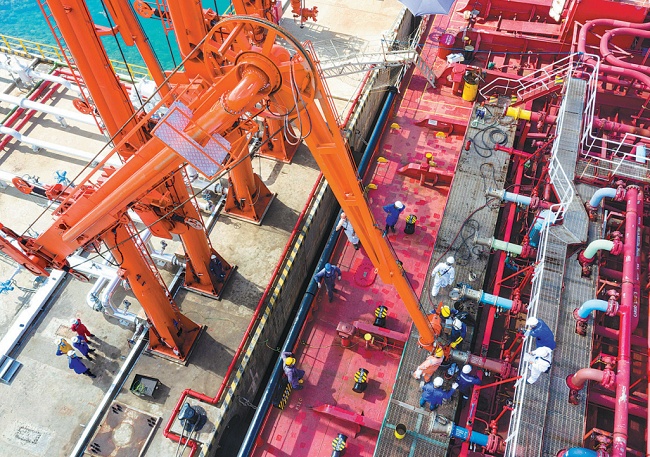 Workers unload low sulfur fuel oil from the Kaige tanker at the port of Hambantota in Sri Lanka in April. (Photo: Xinhua)

China-funded development projects in Sri Lanka have helped to boost the South Asian country's economy and enhance its competitiveness, according to analysts who rejected claims that the partnerships have created a "debt trap".

The country's generally high debt-to-GDP levels over the past decade reflect factors such as weaker economic performance and significant currency depreciation, Wignaraja said.

"The cumulative value of Chinese infrastructure investment in Sri Lanka amounted to $12.1 billion between 2006 and mid-2019," said Wignaraja, adding that some projects, including those before Sri Lanka joined the Belt and Road Initiative, or BRI, have begun to contribute to Sri Lanka's economy.

The Colombo International Container Terminal has allowed the Colombo port to become South Asia's transshipment hub, said Wignaraja. Managed by China Merchants Port Holdings, the facility is considered the first and only deep-water terminal in South Asia equipped to handle some of the largest vessels.

Noting that some geopolitical analyses have interpreted the China-funded Hambantota port project as a debt trap, Sri Lankan President Gotabaya Rajapaksa has said in a statement that he believes this is not the case.

The president said he was convinced that the large project would have vast potential for generating income and creating jobs for Sri Lankans.

Hambantota port, on the southern coast, was officially launched under a 99-year concession agreement between Sri Lanka and China in 2017. It is about 20 kilometers from one of the world's busiest shipping lanes but in an area of the country that is considered less developed.

By building the port and an industrial zone there, the government expects to transform the area economically, said Bernard Goonetilleke, chairman of another Sri Lankan think tank, Pathfinder Foundation.

"The information in the international media to the effect that the port is a Chinese naval base is a canard," said the former diplomat. "The security of the port is totally in the hands of Sri Lanka."

Goonetilleke pointed to the fact that ships from numerous countries have visited the port, and that Sri Lanka has the right to buy back the shares it sold to the Chinese port operator.

Dushni Weerakoon, executive director of the Institute of Policy Studies of Sri Lanka, said the bigger chunk of Sri Lanka's foreign debt is made up of international sovereign bonds, which has now accumulated to about 18 percent of Sri Lanka's GDP.

Noting that funds in the international capital markets are very expensive, Weerakoon said the benefits of Chinese loans go beyond the financing level as they bring other advantages in terms of project design, management and implementation. "In some ways, it is almost like foreign direct investment," she said.

Barry Sautman, professor emeritus of social science at The Hong Kong University of Science and Technology, said the conspiracy theory of so-called Chinese debt traps, held by some Western media and politicians, reflects a counter-mobilization against the BRI.

Saying negative things about the initiative helps the critics on two fronts, Sautman said. "They say whatever is useful to them politically," he said.

Over the medium to longer term, Weerakoon said she expects countries like Sri Lanka to benefit from its partnership with China.

"China is clearly a country that is going to be investing regionally in the Asia-Pacific, and infrastructure development is something that many countries find very challenging, so it is a very useful and beneficial partnership," she said.

Wignaraja, expecting the economic ties between China and Sri Lanka to deepen, said this requires focused trade and investment, which can be done via more exports to China, technology transfer from China and increasing Chinese foreign investment.

Goonetilleke said the bilateral relations are expected to develop further with visits by senior officials and top leaders in the future.

Sri Lanka and China has signed a supplementary agreement on water research and technology cooperation, aimed at providing clean drinking water to several areas of the island nation, according to a statement from the Chinese embassy in Sri Lanka.