India is reportedly planning to ease restrictions on some investment from China in another sign of a thawing in strained ties after a breakthrough in a nearly nine-month-long border standoff was reached last week. 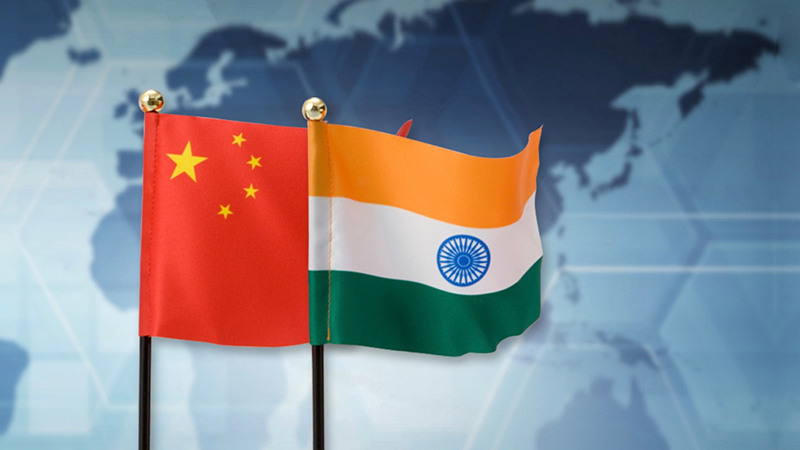 Last April, the Indian government amended the foreign investment rule adding extra government scrutiny for investments from entities in a country that shares a land border with India, that clearly targeted China. /Cover image via Chinese Embassy in India

While New Delhi's move is driven by its aim to create more growth opportunities in an economy going through the worst recession in decades amid the COVID-19 pandemic, analysts in China suggested that Chinese investors and firms may take a more cautious approach against the backdrop of recent experience and past uncertainties in the Indian market.

Several investment proposals from Chinese firms, that were delayed or suspended by India at the height of the military face off, may see a greenlight from New Delhi in coming weeks, according to a Reuters report that cited three government officials with knowledge of the matter. The Indian officials claimed that projects from "non-sensitive" sectors will be approved.

"Yes, it is a sign of easing tensions. However, Indian side needs to take additional measures to give more confidence to Chinese investors," Lu Yang, a research fellow at Tsinghua University's Institute of the Belt and Road Initiative and an associate member of the South Asia Institute at the University of Heidelberg, told CGTN Digital. "There are not many Chinese firms in India and the group has become even smaller after the recent tensions."

"Chinese investors have become sober now. There was a hype of investing in India. Now, they'll have more considerations of risks and challenges in mind before they enter the Indian market," Lu had told CGTN in a previous interview.

Lu also contended that India will now even have to compete with Southeast Asian countries to lure Chinese investors who are constantly looking to invest overseas and also relocate part of the industries due to increasing labor costs and aging problem in China.

"Southeast Asia is such a destination that is attracting Chinese investment, especially after signing the Regional Comprehensive Economic Partnership (RCEP) free trade agreement. India (which pulled out from joining RCEP) will face competition from ASEAN countries in this regard," she elaborated.

Lu said it will be challenging for India to seek Chinese investment in labor intensive industries, key to driving India's economic growth and boost employment, as the South Asian country might find it difficult to showcase its advantages over Southeast Asia.

Other Chinese experts, meanwhile, told Global Times that investment from China's smartphone makers and new-energy companies will be the first ones to be allowed into India. 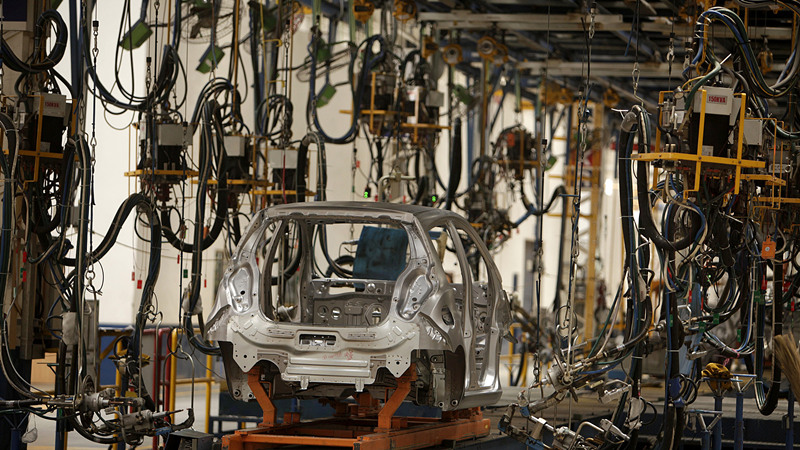 General Motors' manufacturing plant in Talegaon town of Pune district in India's western Maharashtra state. China's Great Wall Motor's acquisition bid of the GM plant is among over 150 proposals from China that have been put on hold in India due to an investment rule change last year. /CFP

Last April, the Indian government amended the foreign investment rule adding extra government scrutiny for investments from entities in a country that shares a land border with India, that clearly targeted China.

The discriminatory rule change had put over 150 proposals from China worth more than $2 billion on hold, including a proposal by China's Great Wall Motors' acquisition of a General Motors' plant in India.

"We'll start giving approvals to some greenfield investment proposals, but we will only clear those sectors which are not sensitive to national security," one of the officials told Reuters, adding that the proposals will be cleared in the coming weeks.

The government will also look to clear some other brownfield projects – new investments in existing projects – that are not a risk to national security after the first round of clearance to new investments, the above officials said.

The government is also considering allowing some investment from Chinese firms in certain sectors via the "automatic" route, or without government scrutiny, said the officials. The officials said investments, for stakes of up to 20 percent, in "non-sensitive" sectors, may revert to the automatic route for nations with which India shares land borders.

'A step in the right direction'

Some Indian commentators welcomed the decision. "A step in the right direction now that disengagement is at hand. Economic recovery, job creation should be the priorities," tweeted M K Bhadrakumar, former Indian diplomat who had served as the country's ambassador to Turkey and Uzbekistan. 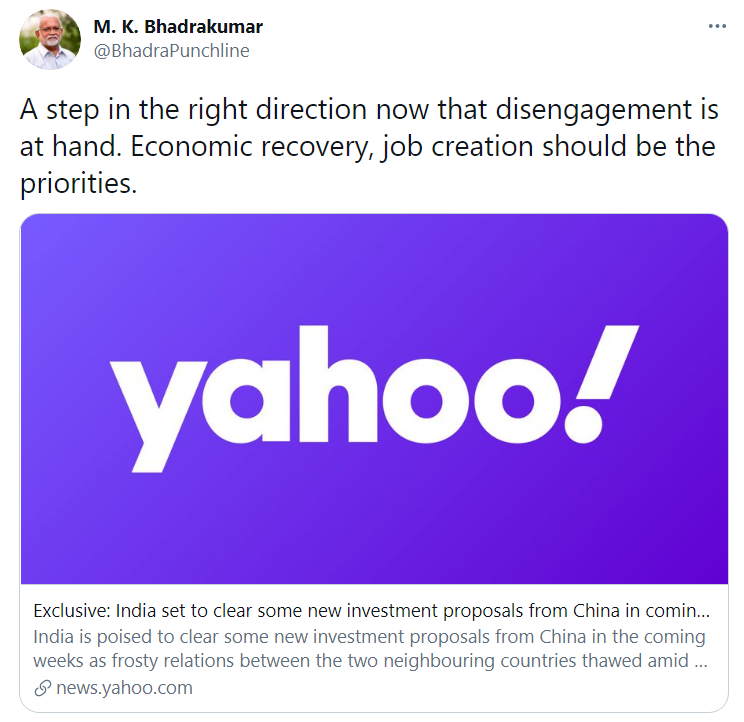 While the restrictions on investment were introduced to hurt Chinese companies, analysts suggest the move also adversely impacted Indian consumers.

The restrictions on Chinese businesses were hurting Indian consumers, as the country lacks alternatives to replace Chinese products, from infrastructure to smartphone apps, Liu Zongyi, secretary-general of the Research Center for China-South Asia Cooperation at Shanghai Institutes for International Studies, told the Global Times.

"China has become a significant investment source for India in recent years, with total investments hitting $10 billion from 2017 to 2019. As a country with few domestic industries, India will need a boost in jobs and new technology as its economy is hitting its bottom," Liu said.

He argued that the need to lift the sliding economy and the easing tension along the borders meant India will be once again open to Chinese investment, adding that proposals from smartphone makers and new-energy companies will be especially welcomed, while proposals in infrastructure investment might be postponed. 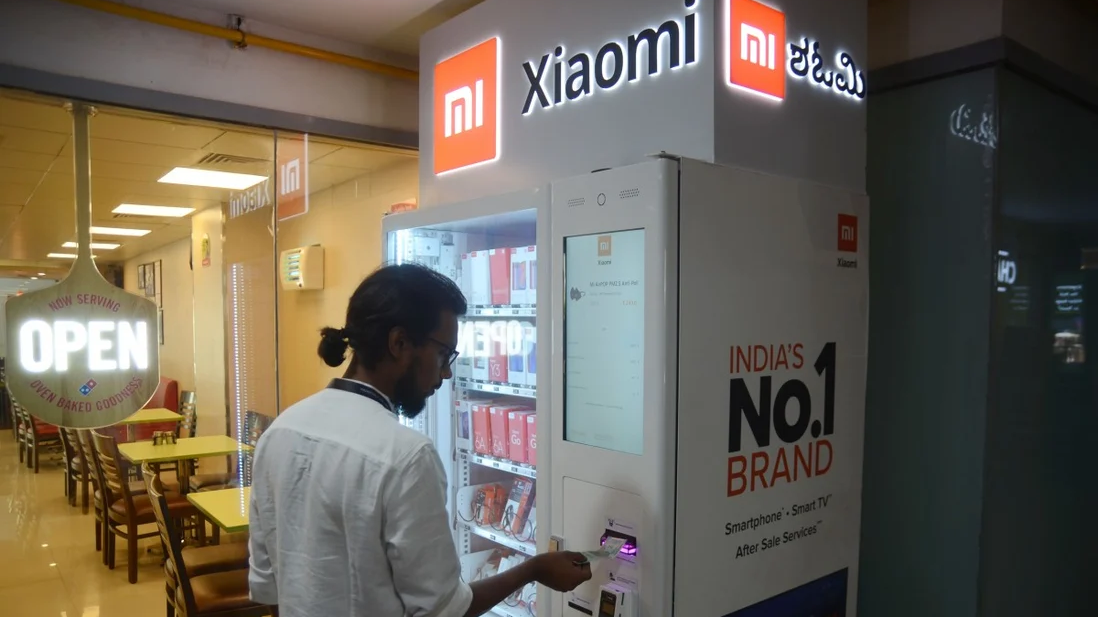 A purchaser uses the first Mi Express Kiosk, a vending machine from China's smartphone maker Xiaomi, in Bengaluru, India, May 17, 2019. Photo for illustrative purpose only. /Xinhua

"Some of the Chinese smartphone brands, like Xiaomi, have been so deeply integrated with the local market that the plants in India are contributing significantly to smartphone exports. India is also relying on China for around 80 percent of its solar power equipment. They are now indispensable in its new-energy reforms," Liu said.

While India's likely move to lift curbs on certain Chinese investment will be welcome and could be a good push towards reviving trade and economic ties with its northern neighbor, experts fear that New Delhi's recent knee-jerk decisions including the ban on scores of Chinese apps might have dampened the enthusiasm of Chinese investors and firms.

"Bad feelings go both ways, and the chance for the China-India relationship to warm up in the short term is slim," Qian Feng, director of the research department of the National Strategy Institute at Tsinghua University, told the Global Times, adding that Chinese investors can be more conservative when it comes to India, especially after so many Chinese companies' plans were hindered last year.

It is still early days to declare business as usual between two of Asia's largest economies, but if India goes ahead with its reported plans to lift curbs on investments from China, it will certainly be a step in the right direction.