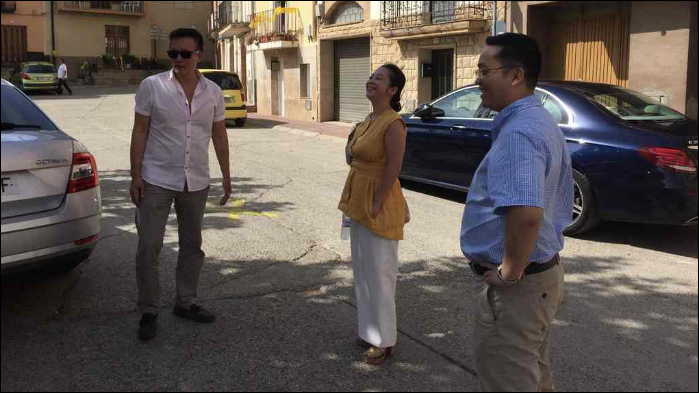 A Chinese-born businessman, now with Spanish nationality, and two Chinese partners bought an olive tree farm and are exporting premium oil to China. They are among a handful of Chinese involved in olive oil production in Spain.

One indicator of the change that Chinese-born businessman Lam Chuen Ping has caused in the tiny Spanish village Bovera is evident when the town's mayor, Oscar Acero, showed up to greet our CGTN team who are in town to film a report about Chinese investors taking a stake in olive oil production.

Bovera is in a hilly, remote olive-producing region with two-hour drive west of Barcelona, in eastern Spain. The mayor said there are about 100 olive growers and olive oil producers in 24 villages of the immediate area, and the region has been making olive oil for centuries.

But Lam's investment is like no other they've ever seen here. For the first time locally, Chinese-born investors have taken a stake in Spain's olive oil production. And several industry veterans in Spain's main southern olive oil region told CGTN that Lam – who was born in southern China's Guangdong and now with Spanish citizenship – and his two Chinese partners, are a rarity in this industry. Other Chinese have gotten involved in the import-export side of the business, they said, but none that these industry leaders had heard of Chinese buying olive groves in Spain in order to produce olive oil.

Lam has been in Spain for decades and owns a well-regarded Chinese restaurant in Barcelona called Memorias de China (Memories of China). It's a flagship for his business activities over the years in which he also dabbled in export and import of various products. But the latest venture is a big change.

"I asked myself what I hadn't done in life. I had never planted a tree. And that's just when friends asked me, 'why don't you invest in an olive tree farm?'" Lam is president of Spain's Chinese Associations, and one of his two partners is Chen Feifei who has been in Spain for more than 20 years. The other partner is a Chinese man also living in Spain. In the summer of 2017, they bought a historic olive tree farm just outside of Bovera. It has 86,000 olive trees and they already were producing olive oil with their first harvest last year, and most of the oil was exported to China. It's extra virgin, meaning the oil results from just a single pressing, and falls under the premium category.

The property covers 190 hectares or 470 acres, and about a third of it is planted with olive trees, most of which are in the so-called “intensive” planting, namely neat rows, with the trees not far apart, allowing for harvesting with specialized large farm machines. Besides, a smaller number, about 6,000 trees, are in “conventional” planting, where the trees are farther apart. These must be harvested by hand and are among the older trees that surround the landmark stone farm palace, dating back to 1907. Lam jokes that its only habitants now are chickens. But he and his partners plan to refurbish it and convert it into a center for conferences about olive oil, and install about 20 hotel-style rooms. Later, they'll try to increase planting of olive trees, if there's sufficient water. Their crop is pressed into oil at a nearby facility that is part of a growers' cooperative. Lam says his move into olive oil production comes as China's younger generation, especially those who have traveled to the West, have taken a liking to olive oil's taste and healthy properties.

“If they can afford it, they buy it,” he said. It's part of China's increasing appetite for products associated with the Mediterranean diet, built around healthy foods. Lam and his partners have been learning about the olive growing and olive oil trade from their veteran property foreman, Joaquim Espinoz. Lam seems especially interested in walking through the endless olive groves, examining the trees and their fruit. “We are watching how the trees are changing the color, be strong, and at this moment, we see the olive,” Lam said. "Now, they're so small. But every day, they grow a little bigger.”