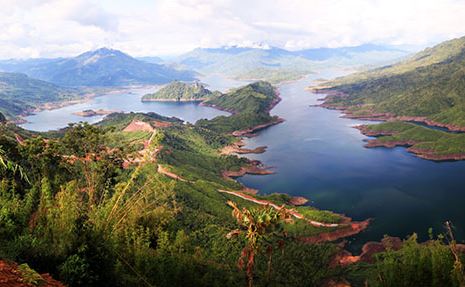 The Namphay Power Co., Ltd., a joint venture by China's Norinco International Cooperation Ltd and Electricite Du Lao (EDL), has been launching a health project in Xaysomboun Province of hilly central Laos in the past weeks. Under the project, a team of 13 doctors from the province and Lao capital Vientiane offered free medical examination and treatment to local villagers, as well as providing residents with publicity and education on health knowledge, among other health services. In the past, local villagers used to lead a relatively primitive lifestyle, using "slash and burn" cultivation, collecting and hunting to make a living, with very poor medical conditions. In 2013, China's Norinco International Cooperation Ltd set up a joint venture with its Lao partner EDL, and started the construction of the Namphay hydropower plant, hence bringing great changes to local villages hidden deep in the mountain. The joint venture built a road of about 50 kilometers into the steep mountains, brought the villagers to settle down along the road and get in touch with the outside world. When the Namphay reservoir starts to store water, the Namphay company built a new immigrant village with educational, administrative, economic and cultural venues for the three villages affected by the reservoir operation. As the condition in the new village is much better than the old ones, the Lao government even moved villagers from two other poorly-conditioned villages to join the resettlement. Some ethnic minorities scattering in the mountains also come to settle in the village. Sengdeuan Phandavong, a 33-year-old housewife in the village, was given some medicine after her physical examination. "I am happy that we can have medical examination in our village," she told Xinhua. "They gave me some medicine for my gastritis. After the dam was built, it's more convenient for us to use electricity, which will my life better and easier. The company has helped us a lot." In addition to cash compensation, the Namphay company also provided the resettled villagers with newly-built houses, schools and roads, taught them how to grow crops, and trained them with various livelihood skills. Khamla Sanyalath, a 56-year-old villager, moved to live in the new village from the far northmost Lao province of Phongsaly, over 300 kilometers away. "My back hurt for a long time, so I'm glad to have this physical examination," he said. "Since the Namphay dam was built, it's more convenient for us, especially on transportation. The sanitary in our village is quite good now because we have a health center, and we also have a school, ensuring our younger generations' access to education." Teyin Bavongxay, the head of a district health center in Xaysomboun Province, said the medical analyzer machine helped them to treat patients faster. "We can diagnose more than 300 villagers daily. This project has a good feedback since almost 500 villagers take physical examination per day and we have achieved more than expected," he said. The resettlement village head Bounsou Norvongphachanh told Xinhua that ever since the dam was built, there have been many activities going on at the village to help the villagers to recover and improve their livelihood, such as vegetable plant and catfish farming, and promoting textile production. "After they built houses for us, our lives are getting better in many ways," said the village head. He Yaowei, general manager of Namphay Power Co., Ltd. told Xinhua that the free health service strengthened the communication between the company and the local residents The company also provides a development fund for Xaysomboun Province to improve local infrastructure and people's living standards, and it is willing to share with the Lao people the benefits brought by the China-proposed Belt and Road Initiative, He said.