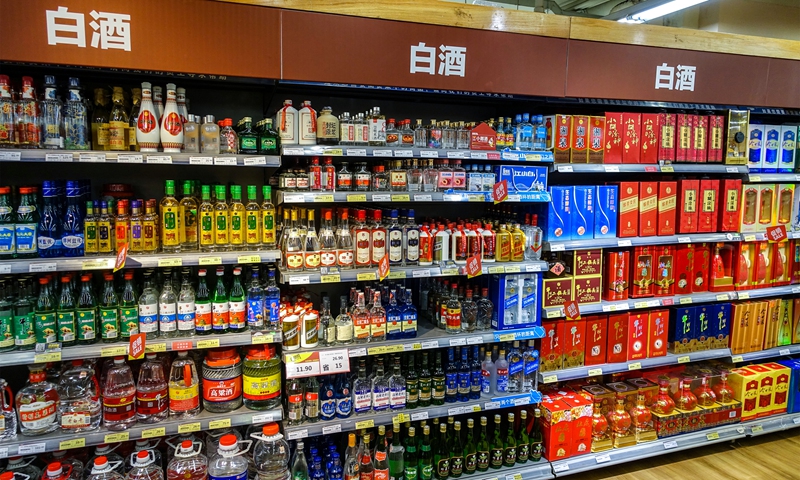 A couple of Chinese baijiu brands said on Thursday that their profits grew at double digits in the first three quarters of 2022, reflecting stable performance in an important consumption sector despite COVID-19 flare-ups. Experts said that consumption will continue to rebound during the rest of the year, given favorable factors such as continuous growth in income.

For instance, Kweichow Moutai's preliminary calculations showed that its total revenue reached about 89.79 billion yuan ($12.49 billion) between January and September, up 16.5 percent year-on-year. Its profit grew around 19.1 percent to about 44.4 billion yuan.

Another leading baijiu maker, Shanxi Xinghuacun Fenjiu Group, said on the same day that its profit reached 7 billion yuan in the first three quarters, up 42 percent year-on-year, thanks to a significant revenue increase from high-end products.

As an important indicator of domestic consumption, the rosy liquor industry underscores the stabilization of the country's consumption sector, said analysts.

The NBS is set to announce the retail sales figure for September on Tuesday.

Analysts with China International Capital Corp, a major investment bank, said in a note posted on its WeChat account that consumption will continue to rebound in the second half of the year, with a marked improvement expected after August due to lower base figures last year.

They said that favorable factors including continuous growth in workers' per capita income, consumption upgrading as well as opportunities in lower-tier cities will inject momentum for the sustainable development of retail consumption.

"Retail sales are expected to post up to 8 percent year-on-year growth during the fourth quarter, a peak shopping season when residents step up spending to make preparations for the New Year holiday and Chinese Spring Festival," Dong Dengxin, director of the Finance and Securities Institute of the Wuhan University of Science and Technology, told the Global Times on Thursday.

He voiced confidence that consumption is able to maintain stable growth and the country's overall economic growth will stabilize later this year.

The authorities stressed stimulating market demand to fire up economic recovery by various means. A State Council executive meeting on September 21 reiterated that policy measures to boost investment and consumption will be advanced on a priority basis, including fiscal and financial support for key infrastructure projects throughout the country.

Local governments have also ramped up efforts to stabilize demand for a recovery. Over 20 Chinese cities have released a total of about 4 billion yuan worth of consumption vouchers, with more expected in the fourth quarter to ramp up consumption.