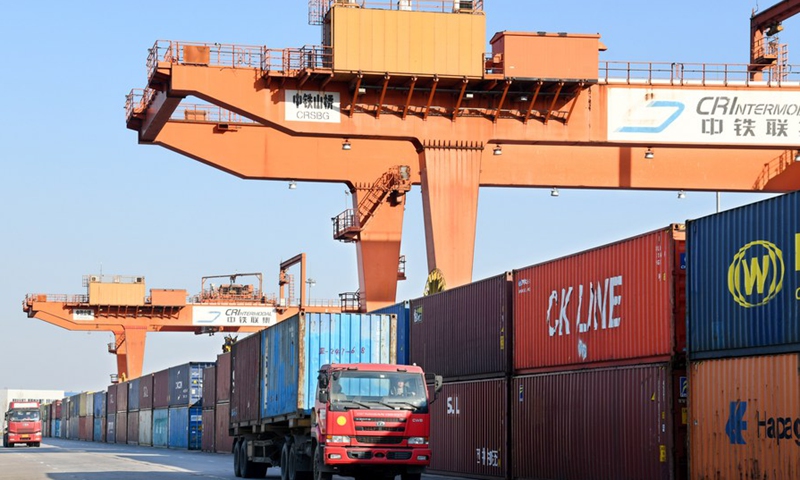 Ports in North China's Inner Mongolia Autonomous Region linking Mongolia are reopening as the COVID-19 outbreaks have eased there, which an expert said will further promote trade despite global uncertainties and geopolitical tensions. And, booming trade is expected to help alleviate Mongolia's economic difficulties.

Zhuengadabuqi Port in Dong Ujimchin Banner, bordering Mongolia, has formally resumed customs services, after it was shut down on September 15, 2021 due to the latest wave of coronavirus outbreaks along the China-Mongolia border, a staff member from Dongwu Customs, which is in charge of the port, told the Global Times on Sunday.

"In order for the port capacity to recover as soon as possible, the port opened a 'green passage' on July 25 that allows the passage of people and cargo from both sides, including vehicles and machines," said the staff member. By Saturday, a total of 108 vehicles and 350.6 tons of goods had been exported to Mongolia via the port, according to the staff member.

To prevent cross-border transmission of COVID-19, local authorities have set up specific areas for containers of coal and crude oil, while efforts have also been made to put the port under closed-loop management, the staff member said.

The reopening of ports linking China and Mongolia will boost the exchanges of major commodities including coal, crude oil and machinery, Sun Huijun, an expert on relations between China, Mongolia and Central Asian countries, told the Global Times on Sunday.

According to industry newspaper China Metallurgical News, Mongolia's coal exports surged 225.8 percent on a yearly basis to reach 2.36 million tons, the highest since February 2021. The country's coal exports to China jumped 224.2 percent year-on-year in the month to hit 2.1 million tons, it said.

"With an international energy crisis amid the Russia-Ukraine conflict, increasing coal and oil imports from Mongolia will help increase strategic reserve of leading industrial materials for China," Sun said, noting that "ensuring smooth trade between the two countries will effectively reduce Mongolia's heavy economic pressure caused by the pandemic."

A report released by the World Bank in April projected that Mongolia's economy could grow by 2.5 percent in 2022, saying that its economic growth is being dragged down by protracted trade disruptions and logistical bottlenecks due to border closures.

In a sign of rapidly recovering trade, Xuzhou in East China's Jiangsu Province has launched a new freight train service to Mongolia, the Xinhua News Agency reported. Carrying about 440 tons of goods valued at $1.4 million, including motorbikes, aluminum empty cans and security doors, the train is expected to arrive in Ulan Bator on August 1, it said.

On July 20, a batch of aid commodities including steel plates, street lights and electric gates were transported through Uligi port in Inner Mongolia to Mongolia, marking the first temporary opening of the port this year, said a statement on the Hohhot customs website.

Due to the impact of the COVID-19 pandemic, Uligi Port was ordered to open only from the 15th to 25th of each month from March to December, and was first opened in 2022 on July 20, a staff member from Alxa customs, which is in charge of Uligi Port, told the Global Times on Sunday.

A total of 26.3 tons of cargo valued for 862,000 yuan was exported through the Uligi Port to the Mongolia on the first port-opening day, said the staff member.

"Mongolia on the other side of Uligi Port has abundant mineral reserve, including the world's largest coking coal mine," said the staff member, while noting that bilateral mineral trade has not started yet via the port.

The Chinese and Mongolian economies are complementary and have great cooperation potential, with China owning a large market, advanced technologies and sufficient capital, while Mongolia is home to rich mineral resources.

The two countries have maintained close economic relations. China has been Mongolia's biggest trading partner and the top source of foreign investment for 18 consecutive years. According to data from Chinese Ministry of Commerce, the bilateral trade volume hit $9.12 billion in 2021, up 35.3 percent year-on-year.

By giving play to China's advantage in infrastructure, the two countries should strengthen cooperation in this regard to realize infrastructure connections as soon as possible, Sun said, suggesting the two sides step up cooperation in emerging sectors including logistics, cross-border tourism and finance as well.

He said the booming economic cooperation between China and Mongolia will contribute to the development of the Belt and Road Initiative in the post-COVID-19 era and inject impetus into the recovery of global industrial and supply chains.